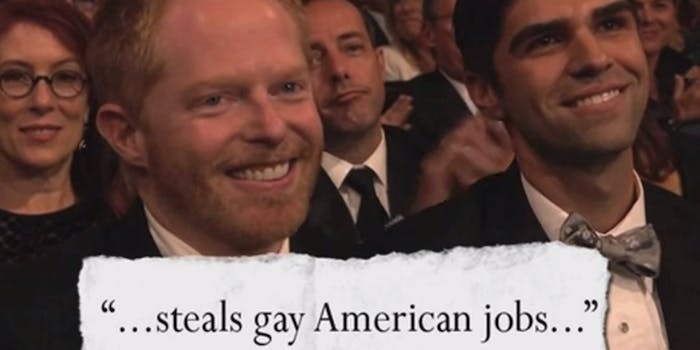 There might be some trouble in the marriage between Cam and Mitchell.

The two actors portray a married couple on the ABC comedy. Ferguson (who plays Mitchell) was up against Stonestreet (who plays Cameron) in the category “Outstanding Supporting Actor in a Comedy Series,” which Stonestreet won. However, Ferguson was nonplussed.

“I’m so thrilled for him,” he said snarkily. “He was so generous to me in his speech…rightfully so.”

Kimmel believes that Stonestreet won because he is a straight actor playing a gay actor, while Ferguson’s role is not as challenging because he’s gay in real life. “You might want to think about dating some women,” retorted Kimmel.

Ferguson has a plan to combat Stonestreet’s win by labeling him as a job-stealer, a liar, and an ass-kisser.