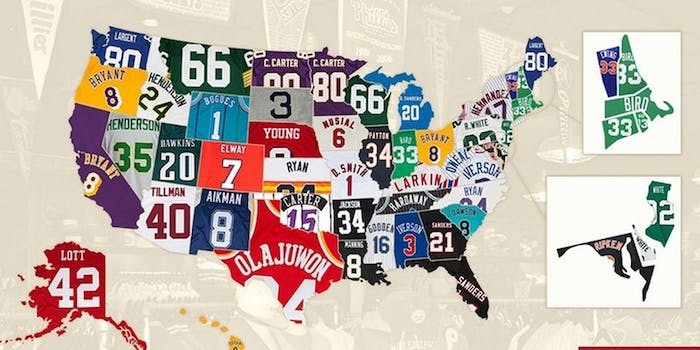 State-by-state map of most popular jerseys has bewildering results

What's the deal with Babe Ruth in South Dakota?

When deciphering the map released by clothing company Mitchell & Ness below and trying to determine why certain states buy certain retro jerseys, much of the top-selling items make plenty of sense. Deion Sanders’ jersey in Georgia and Florida seems right, considering he played football for Florida State in college and, at one point in his pro career, wore the uniform of the NFL‘s Falcons and MLB‘s Braves. Broncos Hall of Fame quarterback John Elway makes sense for Colorado. Former Cardinals linebacker turned war hero who was killed in action Pat Tillman is perfect for Arizona. And it wouldn’t feel quite right if NBA Hall of Famer Larry Bird, who hailed from and played college in the Hoosier State, didn’t represent Indiana.

But there are a few instances where the jerseys don’t make any sense.

As far as I can tell, the 49ers Hall of Fame defensive back has no connection to Alaska. He’s from Albuquerque, New Mexico, and played his college and most of his pro career in California. Why does Alaska love him so much?

I lived in Cincinnati for six years, so I know how much the people of Ohio love their state’s sports history. Why then is Kobe Bryant—who is from Pennsylvania and has spent his entire career in California—so beloved in the Buckeye State? Except for the fact that jersey-buyers from three other states also made Bryant No. 1, it’s unclear. None of those states, by the way, was Pennsylvania.

3) The power of Rickey Henderson in the West

I have no idea why the baseball Hall of Famer is so popular in Nevada and Idaho. On that note, Babe Ruth in South Dakota? Why not, I guess?

4) Manning dominates in Louisiana, but not that Manning

Perhaps my favorite result is that Louisiana’s top-selling retro jersey is for a Manning. Nope, not the just-retired Peyton Manning, who went to high school in the Pelican State, or his brother, Giants quarterback Eli Manning. Instead, it’s Archie Manning, the patriarch of the family who played for the Saints (and who went 35-91-3 as their starter) and whose sons’ NFL careers have vastly eclipsed his.

Yet, people love Archie, and they love wearing his jersey more than they do Peyton or Eli. If that’s not retro, I don’t know what is.