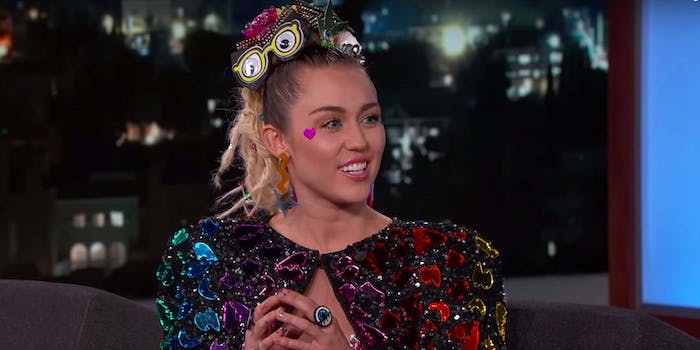 The 19-year-old star defended her "inside joke" by accidentally leaking the news of her Cosmopolitan photo shoot.

Perhaps Miley Cyrus should take another break from Twitter.

On Nov. 14, the 19-year-old singer and actress tweeted “nothing makes you feel uglier than someone saying your beautiful on the inside.”

While the tweet caused many followers to assure her that she was physically beautiful, it did not sit well with everyone.

“@MileyCyrus but Miles being Beautiful on the inside means ur caring loving& nice it should make u feel extra Beautiful outer Beauty can fade,” Kurt Zellner tweeted.

“@MileyCyrus girl that is ALL I HAVE tho,” cherriLizabiff tweeted.

Upon noticing the reaction, Cyrus made a second tweet minutes later.

“Everyone calm down. I was kidding about that! Inside joke. If your offended by that you obviously don’t get my humor. Sorrrrrals!”

Next, she tweeted an iPhone screenshot of a text message conversation that was meant to back up her “inside joke” claims. While the tweet may have proven her case, it also managed to possibly destroy the secrecy of her photo shoot for an upcoming issue of Cosmopolitan.

“Not sure if I was supposed to drop that yet haha! ❤ Pix look soooo dope! @ChrisMcMillan @patiprema @RachelZoe @jennahipp,” she tweeted.