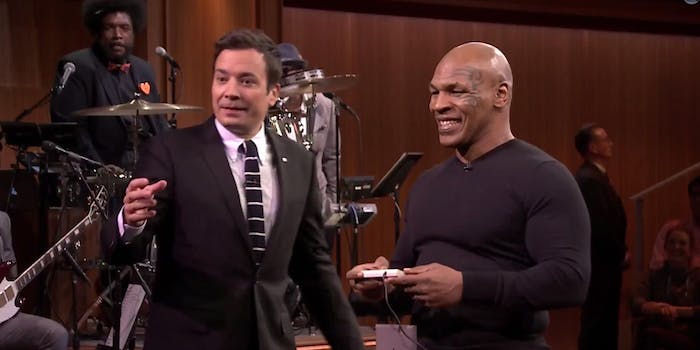 Few matchups are more intense than Tyson vs. Tyson.

Mike Tyson was nearly impossible to beat in the video game Mike Tyson’s Punch-Out!! Not even the real Mike Tyson could beat him—or could he?

The world finally got the answer to that question when Tyson appeared on The Tonight Show with Jimmy Fallon and fought his video game alter ego. In the end, Tyson didn’t stand a chance against Tyson, but you’ll have to watch the clip to see what that means.

This isn’t the first time Fallon has had actors play their video-game selves. Just last month, Piers Brosnan played as James Bond in the Nintendo 64 game Goldeneye and lost miserably.

It seems that the Tonight Show’s producers know their video game systems. Instead of playing the game on an NES, they have it running on a Retron5. That explains why the game looks so crisp and clear—the Retron5 upscales classic games to 720p.