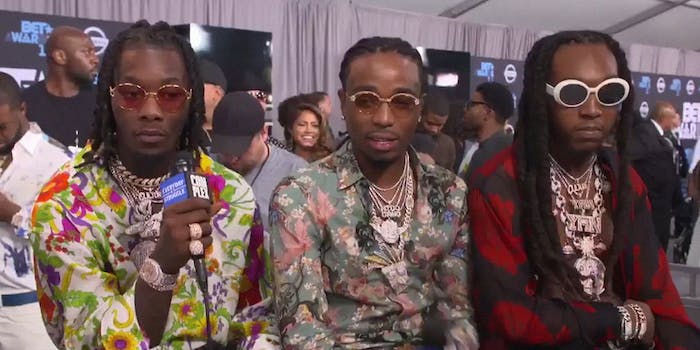 A 'Chappelle's Show' sketch made real.

At the BET Awards on Sunday, a question about “Bad and Boujee” got weird.

DJ Akademiks, Joe Budden, and Nadeska Alexis were interviewing Migos pre-show for the Complex series Everyday Struggle, when Akademiks got stuck on a question to Migos’s Takeoff about whether he was left off the hit song. And then Budden ended the interview rather abruptly. And then the mood changed.

It’s just a minute-long clip, but it’s quite a journey.

Alexis and Akademiks both claimed they couldn’t hear during the interview, but the memes, they did come.

You can't tell me Migos squaring up to Joe Budden don't look like Prince's crew on Chappelle Show pic.twitter.com/VnahqBeyJz

Dj Akademiks trying to figure out what TakeOff was saying pic.twitter.com/Rpw0qnSAoX

When you see Migos beat up Joe Budden instead of DJ Akademiks pic.twitter.com/rpFdXbGtTM

Takeoff: "Do it look like I'm left off Bad and Boujee?"

This isn’t the first time an interview got heated under Akademik’s questioning; Vic Mensa recently took him on for mocking violence in Chicago. It’s not the first time he’s gotten into it with Budden, either.

Vic Mensa applying pressure to Akademiks for the culture >>>

ya man going bald under that fittedpic.twitter.com/ycmnu7XbVw

Migos was reportedly involved in an altercation with Chris Brown as well.