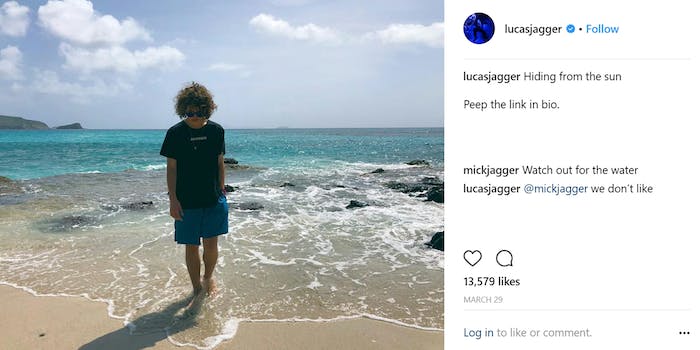 Mick Jagger is really into his teen son’s Instagram

Mick Jagger has a teenage son, Lucas. And Lucas, like any normal teenage boy of wealth, has an Instagram account where he documents all the cool things he does, like hanging out in Greece, São Paulo, and at “Lolla briefly.”

As Nashville Scene editor D. Patrick Rodgers pointed out, Jagger isn’t just content to silently linger on his son’s page. He’s leaving comments. On a photo of Lucas walking in the surf of an unknown beach, his father commented, “Watch out for the water.”

Mick is no Insta novice. The Rolling Stones singer, who just welcomed another son in 2016, has been on the platform since 2013. There’s something vulnerable about this photo of him sitting on a tree.

It’s great to be back in Ireland, first stop was their inaugural cricket test match versus Pakistan #ireland #cricket

Watch out for the grass!