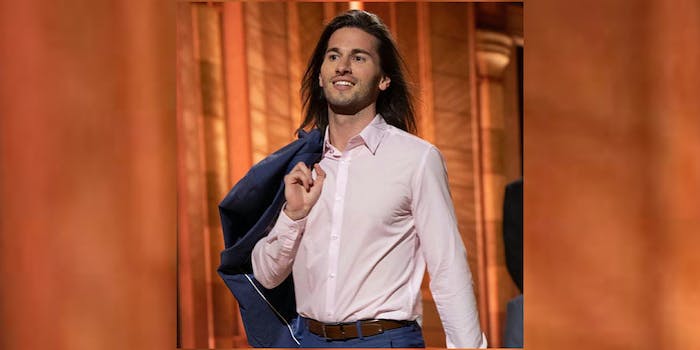 Friday has denied the allegations, saying they're just 'for attention.'

Another ABC reality dating show has been put under the microscope after two women accused contestant Michael Friday of sexual misconduct.

ABC pulled the second episode of The Proposal in June, after one woman, Erica Denae Meshke, posted her allegations against Friday—a comedian from Milwaukee—on Facebook. She claims Friday is “directly responsible for my date rape,” and that in November, after meeting on Tinder, she met Friday and two other men in an apartment complex lobby. Friday took off, and the woman was left with the two strangers, one of whom spiked her drink.

ABC issued a statement after the episode was pulled: “An allegation has been made against a contestant on next week’s episode of The Proposal. While the accusation was not related to the contestant’s appearance on the program, we take it very seriously. ABC and the producers of The Proposal are pulling the episode while this matter is under review.”

A second Milwaukee woman has come forward with allegations against Friday. The Daily Beast spoke with 24-year-old Karina Solina, who says she also met Friday on Tinder. The two met up at a Milwaukee bar in February and though Solina claims she had one drink, she started to feel “really drunk and tired.” She ended up at Friday’s apartment, where “he forced me to some sexual acts on him that I wasn’t really too keen on doing.” Solina said she plans to file a police report.

Elsewhere, fans of the show Survivor posted about their creepy interactions with Friday, who was a fan of the show. The Daily Beast also spoke with women in the Milwaukee comedy scene, who had similar stories about Friday’s predatory and inappropriate behavior.

Friday has denied the allegations on Twitter, claiming that he plans on “suing the fuck out of anyone who’s made any libelous statements against me regarding the motherfucking bullshit allegations that were thrown at me for nothing more than attention.” The show’s producer, Mike Fleiss, also tweeted about the allegations, though many called him out for a too-little, too-late response.

For the record, I am horrified that any of these abusive assholes are on our shows. We are working very hard to find ways to do better.

In May, Bachelorette season 2 star Meredith Phillips claimed she was drugged and assaulted on set. Lincoln Adim, a contestant on this season of The Bachelorette, was convicted in May of battery and indecent assault. The incident happened in 2016 and Adim was charged then, but many fans were outraged that he was still allowed on the show. Last year, production was shut down on Bachelor in Paradise after a crew member provided details of an alleged assault on set.