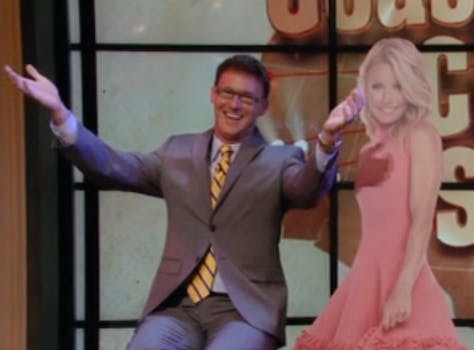 The "What the Buck?" star beat out four competitors for the spot in a week-long televised challenge.

YouTube gossip gabber Michael Buckley’s dream has come true. He’s won a competition to co-host the morning show of record, Live with Kelly, for a day.

The “What the Buck?” host competed for the spot during this week’s shows, which pitted five potential co-hosts against each other with a variety of challenges one needs to fulfill when they host the serious show. A finalist was voted off by viewers each day.

Buckley utilized his massive social media presence to garner votes throughout the week. He’s close to topping one million subscribers on YouTube and has 620,000 followers on Twitter. He kept a constant behind-the-scenes video log going on his YouTube channel to grab votes.

His fans congratulated him on his win by tweeting him well-wishes. Buckley even got a shout-out from Pat Kiernan, a NY1’s likable morning anchor and a possible contender to permanently fill Regis Philbin’s former seat.

“You’ll have fun with @KellyRipa next week. She makes it easy!” tweeted Kiernan.

Buckley’s interviewing chops will be put to the test when he co-hosts the show Tuesday as Will Ferrell is slated to appear on the show.