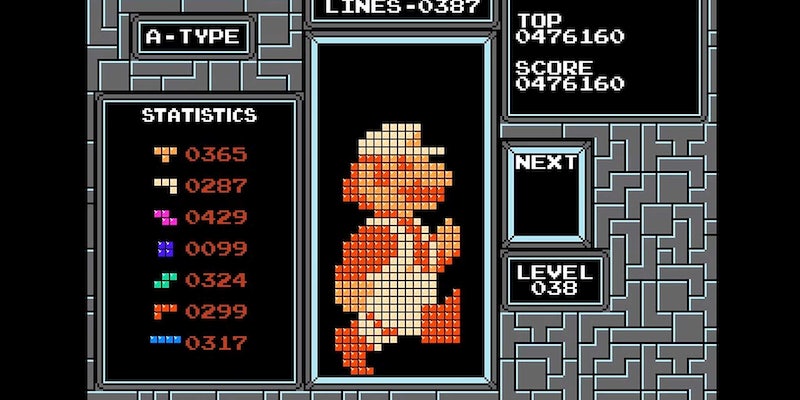 Meet the mind behind the Tetris bitmap printer

Redditor Michael Birken figured out a way to make the line-deleting premise of Tetris work to construct pixelated characters.

On Tuesday, Birken, who goes by zeroone on the site, submitted a lengthy description of what he calls the Tetris Printer Algorithm to r/programming. Birken’s creation essentially takes an expanded Tetris playfield—21×42 as opposed to the more traditional 10×20 field—and uses it as a canvas to draw famous characters from other classic games with Tetriminos. Birken’s algorithm rotates, positions, and drops “a predetermined sequence of pieces” in a manner that allows certain color blocks to remain, eventually forming the images.

The redditor also posted a YouTube clip to r/geeks that puts his Tetris Printer Algorithm into action. Among the characters created are Mario, Link from Zelda, and Samus Aran from Metroid.

For his part, Birken explains that the idea of the project came to him while working on art projects with Post-It notes, footage of which can be seen on his YouTube channel.

“A repetitive task like that puts your mind in a Zen-like trance as your muscles carry out the work,” he explains. “Acting as a human printer made me think of things like this and how they could be achieved.”

Amazingly, the programmer/artist displays a sense of humility when it comes to his bitmap art, dismissing them as ephemeral and largely meaningless.

“I put a lot of time into pointless projects,” he notes. “Someone has to do them. Check out my Web page and YouTube channel for other consumers of my brief existence.”

If you’ve got time to kill, we recommend that you do.