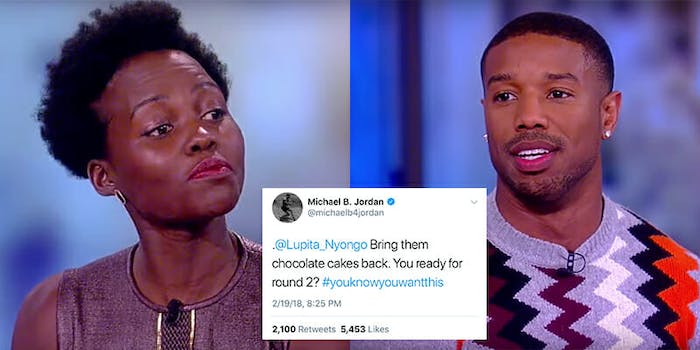 Michael B. Jordan tweets at Lupita Nyong’o to ‘bring them chocolate cakes back’

Michael B. Jordan exchanged some tweets with his Black Panther co-star Lupita Nyong’o on Monday—and Twitter is shook over their suggestive tones.

The public conversation started when Nyong’o tweeted a video of her storming into Jordan’s dressing room and requesting he do a pushup. Apparently, the two made a bet on the set of Black Panther, and Nyongo’s winning prize was to command Jordan to do “on call pushups” anytime she wanted.

The video, taken backstage at The View, shows the pair hugging and laughing before Jordan drops for one (perfect) pushup.

“Stay down,” Nyong’o tells him, giving us all flashbacks to every moment that Nyong’o’s Nakia was a total badass in Black Panther.

But it’s Jordan’s now-deleted response that had Twitter totally floored.

“Bring them chocolate cakes back,” Jordan tweeted at Nyong’o. “You ready for round 2?”

He topped it off with #youknowyouwantthis.

The initial shock was overwhelming.

But some helpful people on Twitter tried to break down the message.

Either Lupita has some actual chocolate cake or… pic.twitter.com/PD8ipjO1V6

Could be more than one cake, maybe she likes baking or something

And others were following right along to watch the drama unfold.

It wasn’t long before Nyong’o tweeted back at Jordan, telling him, “No dessert until you come correct.”

Others thought the wording of the tweet was a little too perfect—and perhaps indicated that Jordan and Nyong’o are just trolling in response to rumors that the co-stars have been looking cozy lately.

I swear they’re trolling us 👀 the wording is too suspect 😂🤔 pic.twitter.com/byGFqU3Uwh

But as it turns out, Jordan’s “cakes” tweet was just another game. In a follow-up tweet, he said he was playing on SafeWord, an MTV show that pits celebrity friends against each other with a series of social media dares.

According to Twitter, that wasn’t all he was playing.

And game or no game—there are still some unanswered questions.