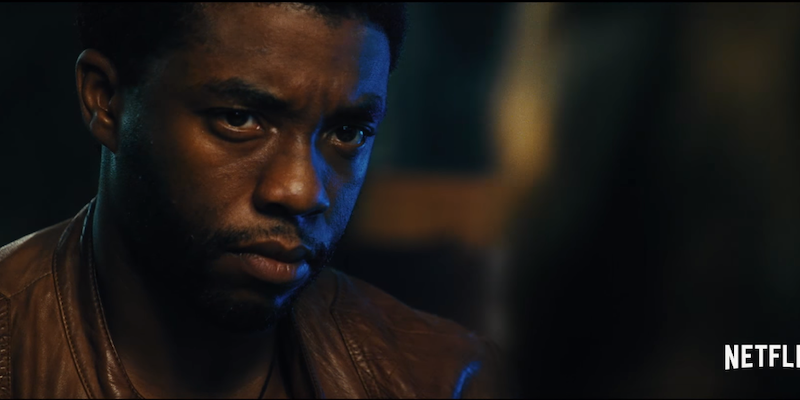 It's a forgettable Netflix movie... that you'll probably watch anyway.

There are two circumstances under which you may enjoy Netflix‘s Message From the King. First, if you’re a fan of Chadwick Boseman and you can’t wait for Black Panther. Or, if you’re into cheeseball action thrillers.

Message From the King is a run-of-the-mill genre exercise. Netflix is actually the perfect place to enjoy Message From the King, which is the kind of the film that would blend into a sea off similar bland flicks on basic cable. In the Blockbuster Video days, I imagine myself picking up the box, looking at the cast, and thinking, “How have I not heard of this?” (The answer: Because it’s not great, and is a direct-to-video DVD.)

Now that I’ve seen Message From the King, I’m ready for it to fade back into obscurity.

It’s about a man, Jacob King (Boseman), who comes from South Africa to L.A. to look for his sister, Bianca. In these kinds of movies there is only one possible outcome for Bianca. After Jacob confirms her fate at a morgue, his search and rescue mission becomes one of revenge. What follows are a series of workmanlike fight scenes devoid of originality to break up the predictability.

If there’s a saving grace to the movie it’s the cast. They inject life into the material. Boseman is an electric presence and his hardened stare provides more character development than anything the writers give him. Teresa Palmer, who deserves better than the usual roles she ends up with, plays a struggling single mother. She’s a waitress and does some tricking on the side. Of course she does. The script (courtesy of Oliver Butcher and Stephen Cornwwell) wouldn’t have it any other way. Everyone is corrupted, and the only thing distinguishing the characters is their wardrobe. They all inhabit the same generic seedy underworld, right down to the leather jackets and ’70s big-body sedans.

As a thriller Message From the King lacks anything that will get your heart racing. Fundamentally, it fails as an action movie because the action is stale: some baseball bats here, some darkly shot punches there. You anticipate every tussle, and never feel invested.

Rounding out the cast are familiar faces Luke Evans, Tom Felton, and Alfred Molina. They’re all fine and do what they’re asked, which is to act tough in order to escalate the tension.

Message From the King is representative of Netflix reaching a new level as a film distributor. The company that vied for legitimacy with ambitious early releases like Beasts of No Nation is now at a point where it releases so many films that it can afford to churn out drivel and keep chugging forward. In that respect, Netflix is working to perfect the airplane movie: It pushed no buttons, you won’t remember it, but you sat through the whole thing.