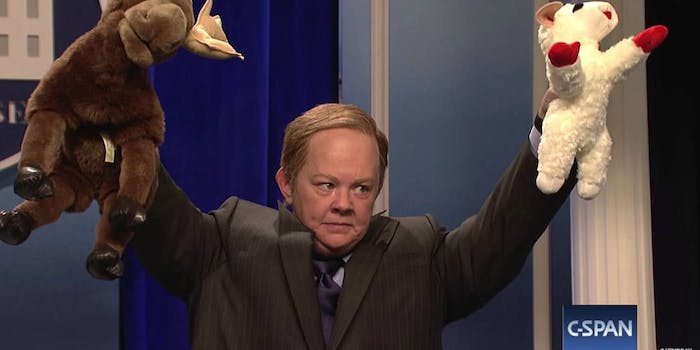 'The president will not be deterred in his fight against radical moose lambs.'

Alec Baldwin has won rave reviews all season long for his portrayal of Donald Trump on Saturday Night Live, and deservedly so. He was at it again in SNL’s cold open on Saturday putting out a solid performance.

But if you ever wondered which Hollywood actor and/or actress would be best suited to play Press Secretary Sean Spicer, SNL has a most excellent answer for that.

The Twitter reaction in the minutes after the sketch aired was proof to how well the impression went over.

Just give @melissamccarthy the Emmy tonight.

Melissa McCarthy as Sean Spicer is the best thing SNL has done in its history.

I've rewound the DVR to watch Melissa McCarthy as Sean Spicer again. It was that good.

Think about it this way: In her monologue, host Kristen Stewart accidently dropped a “fuck” on live TV. And thanks to McCarthy, by the time you read this, hardly anybody will have remembered – or cared about – that flub.