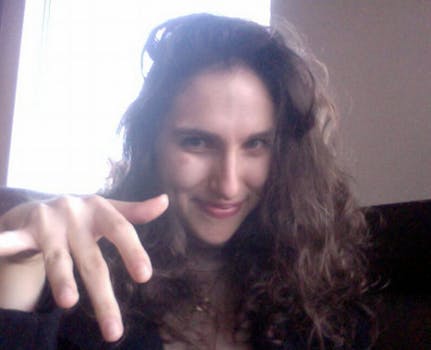 On Twitter, the surreal side of comedian Megan Amram

“My Twitter persona is way more surreal and dark than my human persona,” the comedian told the Daily Dot. “In real life, I’m very warm I think and a huge oversharer, but my persona is some sort of nightmare sand worm.”

With 350,000 followers, the rising television writer’s been included in Time magazine’s 140 Best Twitter Feeds of 2013 and Rolling Stone’s 25 Funniest People on Twitter. (Sample tweet: “The sad irony of this whole thing is that Anne Frank actually did die of Bieber Fever in Bergen-Belsen.”

In fact, her offscreen success has been a direct result of her 140-character humor and her endorsement by “Twitter mentor” Rob Delaney, who has instructed his followers: Go read 100 @meganamram tweets & tell everyone you know to follow her.”

“I love Twitter and it made me an exponentially better joke writer,” she said.

“I do feel like Twitter allowed me to skip a bunch of steps in terms of time you spend in L.A. slaving away trying to get writing jobs, which I am eternally grateful for. In a matter of months, it allowed me to be more visible than people who’ve been working for years out here.”

What excites Megan Amram in her writing, and that of others, is the tension between hackiness and intelligence, how intelligence informs the best kind of stupid. Her example is The Simpsons.

“The Simpsons is an intelligent show full of fart and beer jokes. That tension is inherent in everything I loved growing up, switching between Alfred Lord Tennyson references and corn-in-my-shit jokes.” 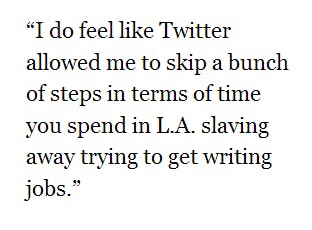 Amram moved out to L.A. after college with the idea of getting involved in comedy writing. Thanks in part to Twitter, she moved quickly from post-college ambler to writing for the Oscars, a Disney show called A.N.T. Farm, and now one of the most enviable comedy writing gigs available, as a staffer on NBC’s beloved Parks and Recreation.

But being good on Twitter doesn’t always translate to the comedy circuit.

“Well, you do have to have good material,” she stressed. “It’s not that I sat there doing nothing and Hollywood knocked on my door, but it wasn’t the opposite of that.”

Amram also excels on Tumblr. Her blog houses mid- and long-form comedy writing, showing a different side of her comedic repertoire that’s more in line with her Hollyword work. She is an inheritor of the Without Feathers tradition of comedic stories and essays, which jibes with her comedic upbringing.

“My mom introduced us early to Woody Allen and the Marx Brothers,” she said. “Everything about how TV and movies get made is different now. It’s moving to pulpier things, which is a result of networks assuming everyone is dumb.”