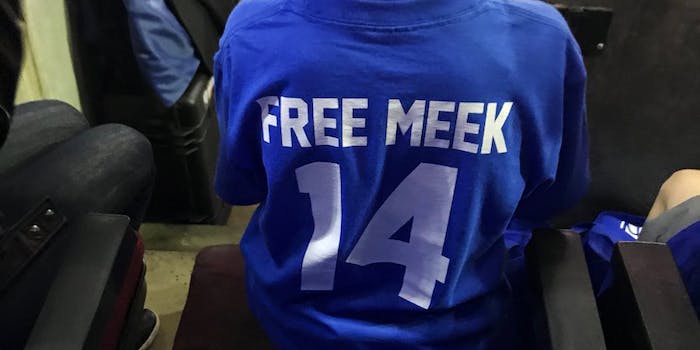 Prosecutor says Meek Mill’s case should be thrown out

The judge still refuses to release him, however.

In a hearing Monday morning, Philadelphia Assistant District Attorney Liam Riley said rapper Meek Mill’s convictions should be vacated and he should have a new trial, according to the Associated Press.

The district attorney’s office said in a statement that there are “questions about the credibility” of the officer who arrested Mill and others over the years. Judge Genece Brinkley still refuses to release Mill on bail, however, so his lawyers said they plan to reach out to a higher court to get him released. This is the same judge who is reportedly under investigation by the FBI for possible extortion.

DA stipulated that @MeekMill is warranted a new trial. It'll be a Not Guilty because the officers involved are no longer permitted to testify against him, and even if they could, I doubt anyone would find them credible. Essentially, Meek will be a free man w/no criminal record.

Advocates for Meek Mill reportedly began dancing in the streets around the courthouse after the news broke and many shared their excitement on Twitter.

HAPPENING NOW!!! Folks are here in the rain screaming #FreeMeekMill !! It’s time for Judge Brinkley to LISTEN and release him NOW!! pic.twitter.com/1MEmYGzmIf

GREAT NEWS OUTTA PHILLY!!! @MeekMill is getting a new trial!!!!!!! Look at the smiles on Meek’s son and mom’s faces!!! #FreeMeekMill pic.twitter.com/jiYUYLoKW6

"I spoke to Meek Mill and you know what he said? He said 'this ain't just about me… it's for every single person locked in these cages that can't have a news camera, that don't have expensive attorneys.'" https://t.co/pGjkA7FmYt

Mill was sentenced two to four years in prison last November for violating his probation on grounds of failing a drug test and violating a court order limiting his travel. Mill’s lawyers have unsuccessfully appealed the sentence multiple times and have called for Brinkley to recuse herself from the case. Mill was first placed on probation after he was convicted on drug and gun charges in 2009 and sentenced to an eight-month sentence according to the Washington Post.

But many who advocate for Mill’s release say they’re protesting for something bigger than just his case—for the reform of a justice system that allows young Black men to become incarcerated for long periods of time—keeping them separated from their families—for non-violent charges, such as possession of marijuana.

Correction: The statement was made by Assistant District Attorney Liam Riley.