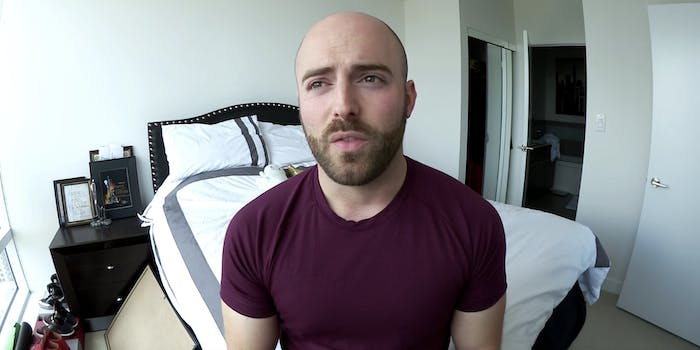 YouTuber Matthew Santoro uploaded an emotional video detailing his alleged experience with domestic violence to an outpouring of support from the YouTube community.

Santoro, an educational video creator who won Best Breakout Creator at the 2015 Streamy Awards, said he was in the relationship for “almost a year of my life” and broke up with the woman in question only a few weeks before originally uploading the video (privately) on Sept. 12, 2015. On Jan. 10, 2016, Santoro accidentally made the video public—and ultimately decided to keep it that way. In the 14-minute clip, Santoro discusses the details of an abusive relationship that he says escalated from controlling behavior and jealousy to physical attacks.

“Domestic violence knows no gender,” said Santoro, before breaking down in tears in his video. “It happens to men and women. And it’s something that men never talk about, because we’re made to believe that we’re supposed to be strong. I never talked about it because I thought that no one would believe me, no one would give a shit, and it’s sad that we live in a society where people have to feel like they’re supposed to keep quiet about these things. And it’s wrong.”

While Santoro does not disclose the name of the woman in question on his social media, it’s common knowledge that Santoro was dating Nicole Arbour, best known for her “Dear Fat People” video that caused widespread controversy. Prior to Santoro’s video, his friend Rob Dyke began talking about the realities of their breakup when Arbour was in the news.

Santoro only generally discussed the relationship prior to this week’s video, discussing how he’s “glad he has good people that love me back.” Dyke’s story lines up with Santoro’s description of the events in his own new video. Arbour responded to the video in comments of her own latest YouTube post, stating, “Heard the little bitch I dumped months ago is still trying to use me to get attention on his vlog channel. Ew.”

This is not the first instance of abuse claims in the YouTube and digital community. For the past four years, sexual abuse and misconduct charges against prominent YouTubers from fans and fellow YouTubers have galvanized the community against abusers. In the Vine community, the relationship between two prominent stars, Jessi Smiles and Curtis Lepore, became embroiled with rape charges and a plea deal.

The Daily Dot has reached out to both Arbour and Santoro for additional comment and will update this story if they respond.

Update 11:12am CT, Jan. 15: Nicole Arbour has denied Santoro’s allegations in a new video on her channel. Furthermore, she accused Santoro of abusing his platform and reach and of disrespecting her wishes to keep her personal life offline.