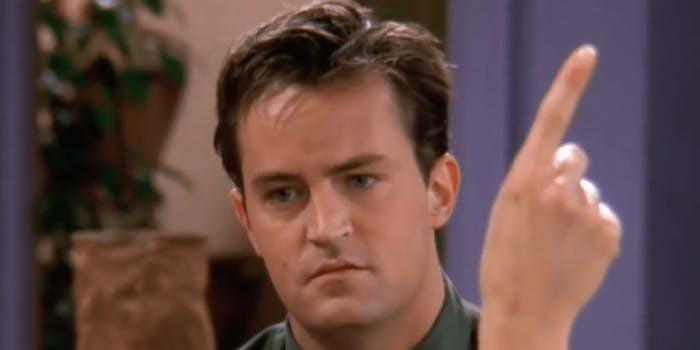 Perry is already up to nearly 7 million followers ahead of the show's 25th anniversary.

This is how thrilled I am to finally be on Instagram. So, here we go…

“This is how thrilled I am to finally be on Instagram,” he wrote, accompanying the sentiment with a GIF of his Friends character Chandler Bing dancing. “So, here we go…”

Perry has jumped in with a splash, accumulating 4.4 million follows in a single day, per his representatives who likely want to capitalize on the new engagement. He’s now up to nearly 7 million followers. Jennifer Aniston’s Instagram debut set a Guinness World Record back in October as the quickest account to a million followers.

Perry’s entry continues the momentum for the approaching 25th-anniversary celebration of the Friends series. Pop-up stores and various exhibits will likely add more viewers for the release of the show’s episode archives—set to launch with the streaming platform, HBO Max. HBO Max reportedly paid $425 million for the rights to stream the series for five years starting in 2020, in what is essentially a cash transaction within WarnerMedia as it owns HBO and its entities.