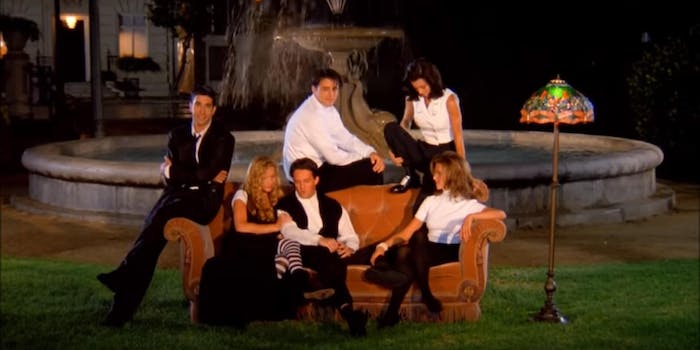 'They ripped 'Friends' right off of Netflix mid-episode, and this is the rudest way to start the new year.'

The new decade is sure to bring plenty of wonderful things along with it, but when 2020 arrived a few things were lost as well. Popular sitcom Friends ended its run on Netflix as the year came to a close, and fans of the series are feeling lost without easy access to binge the show.

As people began to realize the series was no longer available to stream, panic swept the web. Many online have been expressing their anxiety over the move.

“I’m over 2020 already,” one fan wrote on Twitter. “They ripped #Friends right off of #Netflix mid episode and this is the rudest way to start the new year.”

I’m over 2020 already. They ripped #Friends right off of #Netflix mid episode and this is the rudest way to start the new year pic.twitter.com/wj9VW1MIZt

FRIENDS is no longer on Netflix…. crappy new year.

really bad start to 2020 when i woke up at 5:42am and they already took friends off of netflix. frick.

@netflix why would you do this to us. We need Friends. It was the show to turn on when going to bed or the fallback show when you couldn’t find anything to watch. Friends is one of the best shows….ever.

Subscribers in the U.S. were particularly incensed after discovering that the series wasn’t removed everywhere, but it is not accessible to any U.S. streamers.

“Wait, the freaking UK gets to watch ‘Friends’ on @netflix until MAY, but the US loses it TOMORROW,” Twitter user @grayskymornin wrote. “That’s seriously my last straw.”

Wait, the freaking UK gets to watch #Friends on @netflix until MAY, but the US loses it TOMORROW?! That’s seriously my last straw. #cancelnetflix

Meanwhile, fans of the sitcom in other countries are celebrating their continued access.

It’s 2020 and FRIENDS is still on Netflix, thank you Norway

Where to stream Friends now

Unfortunately, fans of Friends without a box set will be on an unwilling hiatus for the next several months. The popular series isn’t streaming anywhere in the near future, at least for viewers in the U.S. The series is set to return to streaming when HBO Max launches in mid-May 2020, but until then, viewers are out of luck. For those who can hold out until May, HBO Max will cost $14.99 for a monthly subscription.

Brace yourselves, binging fans: The Office is next.