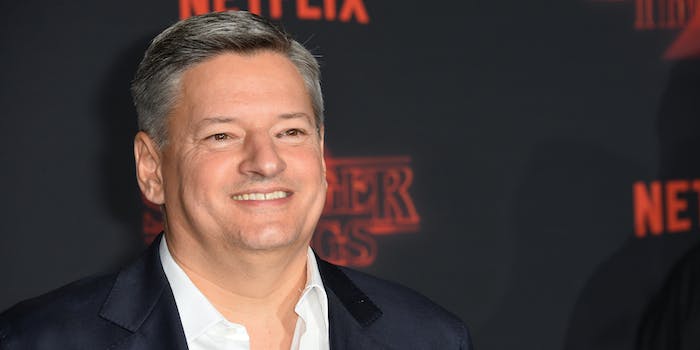 Chief content officer Ted Sarandos intimated that both sitcoms enjoy syndication because of their streaming success.

Netflix chief content officer Ted Sarandos appears unbothered about losing Friends and The Office in the near future. In an interview with Katie Couric during Vanity Fair’s New Establishment Summit on Wednesday, the executive attributed the “enduring success” of both shows to the streaming service.

Moreover, Sarandos intimated that Friends and The Office continue in cable syndication because of their streaming success, according to Variety. He lauded Netflix for introducing the classic sitcoms to new audiences.

“One of the reasons Friends and The Office are so popular is because they’re on Netflix,” Sarandos said. “You imagine what happens when your kid comes to school: ‘I just saw this new show called Friends.'”

Sarandos suggested that neither sitcom would have the same cultural pull if they had streamed on NBCUniversal’s defunct service, Seeso.

“Part of the enduring success of the shows is they’ve been available on Netflix in a way that people can watch them and ingrain them in their lives,” he added. “Part of it also is: they sit down, they push play, and there it is. Friends and The Office found them, too, on Netflix. Remember, Friends and The Office have been widely syndicated for years, still, are. … A lot of that phenomenon has been because of Netflix.”

Friends will leave Netflix at the end of the year, with WarnerMedia’s HBO Max taking the reins when the service launches in spring 2020. Netflix has The Office for an extra year, but the Dunder Mifflin saga will begin streaming exclusively on NBCUniversal’s new service, Peacock, in 2021.

“When they were selling us their content years ago, I was kind of surprised every time,” Sarandos said of Netflix’s ability to buy up numerous legacy series. However, he said he was also wary of the day that would end: “I said, ‘Some day, these guys are not going to sell us their programming and so we better get good at it.'”