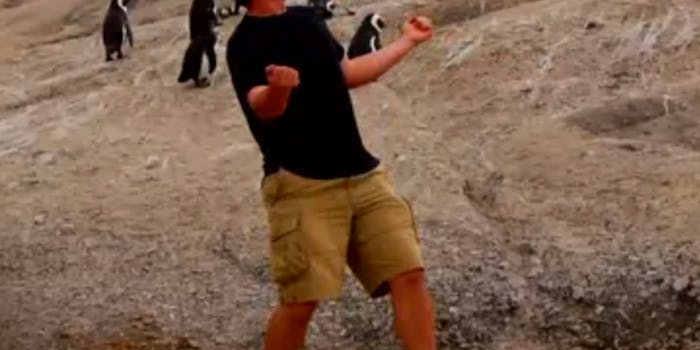 Where The Hell Is Matt, and why doesn't YouTube seem to care?

Matt Harding is a YouTube stud. The Seattle, Wash., native is just having a hard time getting YouTube to notice.

Harding has a channel Where The Hell Is Matt that hosts 71,000 subscribers. On it, he posts videos that will regularly receive over 250,000 views, with a few, like 2008’s “Dancing with the Huli Wigmen,” tallying view counts that casually break a million. He’s got a new video coming out soon, too, another intercontinental dancing trek—one that’s sure to be a hit on YouTube screens around the world.

But in setting up the video’s release with the online streaming site, Harding came to a discouraging realization: YouTube didn’t care where the hell Matt went anymore.

“I haven’t been able to get much interest from YouTube in terms of its release because I don’t have 10 four-minute videos; I have one,” Harding told the Daily Dot.

“My impression is from afar, but it seems as though YouTube has a mandate to increase profitability, and they decided that the way to do that is by generating reliable, ongoing sources of views instead of focusing on the flash-in-the-pan explosions of interest, since they’re harder to monetize.

“YouTube is a business and its customers are advertisers. YouTube’s priorities are dictated by what sells ads, and advertisers are not warming to the idea of running their ads on some random video. They’re used to regularly scheduled shows. What YouTube is pursuing now is taking more mainstream talent that’s more high-quality and reliable. That’s not me.”

Harding has found himself on the short end of a site-wide effort to turn YouTube into cable TV—a system change that’s showing more love to major pop culture stars like Madonna, Shaquille O’Neal, and Amy Poehler. Since January, the site has spent more than $200 million on setting up professionally produced channels, money that will also go towards bankrolling major productions in advance of their airing.

That push has also coincided with the Cosmic Panda redesign, a series of site-wide changes that emphasize individual users’ subscriptions over trending and popular videos by content creators.

Coupled together, the changes are having a negative effect on DIY-style, YouTube personalities, from those whose videos are as amateur as the monstrously popular “Evolution of Dance” to the pop-ready independent hits like Rebecca Black’s “Friday.” Harding said many of the personalities who focused their livelihood on YouTube are struggling to stay afloat. Others, like Harding himself, have had to go back to square one.

“People becoming viral stars and making a living at it has only been a reality for a short period of time. Now that it’s coming into clearer focus, the specifics of that reality are that you have to be able to reliably bring an audience. It’s very hard for most people who make massive videos to repeat that.”

The video’s been seen over 17 million times. It’s a massive hit, but today’s YouTube advertisers want no part.

Not that that’s going to stop Matt Harding.

“My approach hasn’t really changed,” he said. “I’m going to continue making really good videos that a lot of people are going to watch. I can’t do one every week, but I can have a series that will last a decade.”