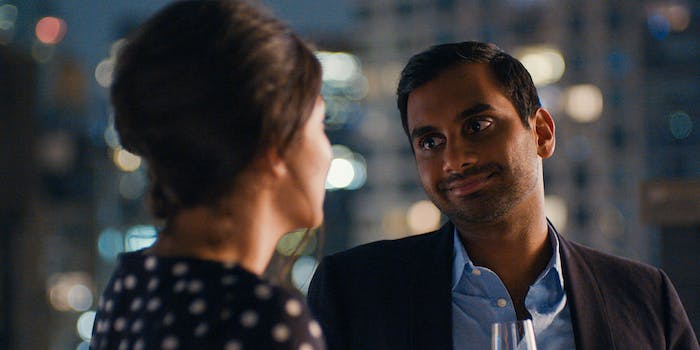 Revisiting that cringe-worthy ‘Master of None’ romance

Aziz Ansari's failure to understand women is no surprise.

After an anonymous woman came forward with an allegation of assault against Aziz Ansari, published Saturday on the website Babe, a familiar feeling came with it. Even if we didn’t read the account—about a date that led to a physical encounter the woman did not feel comfortable with—we would eventually get the gist and have to reckon with the details of another entertainer being inappropriate in a way that continues to surprise people, and yet should not.

Especially if they streamed Master of None season 2.

As with fellow comedian Louis C.K.—whose history of inappropriate behavior was detailed in November—Ansari appeared to “understand” women, or least show us he was trying. He co-wrote the 2016 book Modern Romance, which explored the ups and downs of dating and social media. He devoted standup bits and storylines in his Netflix series to exploring relationships, and the “nice guy” persona. So often, when reports like this come out, we aren’t necessarily looking at the deeper issues that led to them. There’s a race to label these accounts “bad” or “not that bad.”

In light of this, people have revisited Master of None’s season 2 Chef Jeff storyline. Ansari’s character Dev gets hired on a new food show, and Chef Jeff (Bobby Cannavale) becomes his boss and co-star. When it’s discovered that 14 women have come forward to accuse Jeff of inappropriate behavior, Dev tries to distance himself by saying he didn’t know it was happening (though he kind of did) and that he respects women. We’ve seen this move happen in real time, off-screen: A man is called out, other men distance themselves or position themselves as allies, but don’t comment on or confront the power imbalance that allowed for the abuse. As witnessed at the Golden Globes, a lot of men don’t know what to say: Maybe wearing a Time’s Up pin will be enough!

But I started thinking about another storyline in light of the account. At the beginning of season 2, we meet Francesca (Alessandra Mastronardi), whom Dev has befriended while living in Italy. She’s engaged, but she and Dev become more than friendly over the course of the season and start a covert emotional affair. In the final two episodes, those feelings bubble over and must be addressed. In finale “Buona Notte,” Francesca attempts to work through her feelings and tells Dev she’s not sure what she wants. Dev starts getting angry; he feels he’s been “used” and attempts to blame her for the situation they’re in. She says she’s going to leave because she feels “so uncomfortable right now.”

This could be construed as Francesca leading Dev on, and perhaps she was written that way. She’s been in one relationship her whole life, she confides. Dev, as we see in both seasons, has been on countless dates. But there is no real sense of who Francesca is beyond her relationship status; she’s not given much to do in the season outside of hanging with Dev and providing him with whimsical adventures. Without a personality or backstory, perhaps it’s easier for Dev to use her for his own ends, like when he fantasizes about kissing her like they’re in an Italian movie. In “Amarsi Un Po,” a dream sequence finds Francesca being painted as the villain; she rips out Dev’s heart and throws it in a woodchipper while laughing at his “feelings” for her. (Ansari wrote “Amarsi Un Po”; Ansari and co-creator Alan Yang wrote “Buona Notte.”)

Dev’s reaction at the rejection is so familiar. So many women have been in a situation that seemed friendly and suddenly was not. We’ve wanted to back out of a situation that made us feel uneasy (or literally turn and run out of an apartment) but feared violence or anger. As Kristen Roupenian’s recent New Yorker short story “Cat Person” illustrated, even when two people connect on some level, consent can still be murky; that feeling of wanting to change your mind can make the “nice guy” suddenly not. The end of season 2 plays with the idea of fantasy versus reality, but it also leaves us with an uncomfortable potential scenario: Francesca finally relented and got with Dev, even after she expressed reservations about it.

Writer Jada Yuan visited the Master of None season 2 set for Vulture and offered behind-the-scenes notes on the filming of the scene where Ansari and Mastronardi kiss through a glass door, like in the film L’Eclisse. She notes that Mastronardi and Ansari argued over whether the two should actually kiss, and Mastronardi voiced her confusion over her character’s behavior in the scene. In a list of seven takeaways, there’s this bit:

6) There was also a debate over who pushed the glass door aside.

Alan Yang: She’s playing the song and then she brings him over to the bedroom. She’s initiating a lot of stuff.

Yang: That’s what I’m saying. Then that motivates something.

Her response is telling. These men don’t necessarily understand this woman’s point of view. In a recent piece, writer Moira Donegan detailed why she started the “Shitty Media Men” list, which circulated in October and included names, outlets, and everything from accusations of inappropriate messages to rape. In unpacking the whys and hows of the list, she pointed out “another toll that sexual harassment can take on women: It can make you spend hours dissecting the psychology of the kind of men who do not think about your interiority much at all.”

And maybe that’s why this storyline feels so weird. In the end, Ansari’s good-guy persona is up front, and while he does convey something about the way men think about women—and what they think women want—the woman is still an amalgamation, a fantasy.