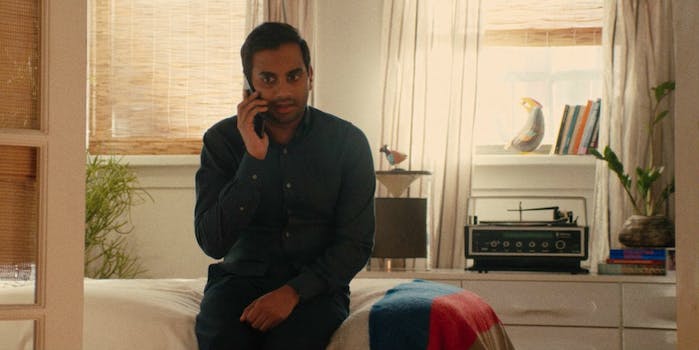 The 'Master of None' star has yet to comment.

Master of None star Aziz Ansari has been accused of sexual assault.

In an intimately detailed report, feminist site Babe relays the account of a Brooklyn-based photographer, then 22, who says Ansari made unwelcome advances on her in his apartment last September, despite repeated verbal and non-verbal cues that she was uncomfortable.

The woman, whose identity was changed to protect her, said he pulled her hands toward his penis “five to seven times. He really kept doing it after I moved it away.”

The problem was, she says, he didn’t really let her move away. “It was 30 minutes of me getting up and moving and him following and sticking his fingers down my throat again,” she said. “It was really repetitive. It felt like a fucking game.”

She says she used both told him and showed him that she was uncomfortable. “Most of my discomfort was expressed in me pulling away and mumbling. I know that my hand stopped moving at some points,” she said. “I stopped moving my lips and turned cold.”

She says she also told him, “I don’t want to feel forced because then I’ll hate you, and I’d rather not hate you.”

After this, however, he allegedly continued to push.

Halfway into the encounter, he led her from the couch to a different part of his apartment. He said he had to show her something. Then he brought her to a large mirror, bent her over and asked her again, “Where do you want me to fuck you? Do you want me to fuck you right here?” He rammed his penis against her ass while he said it, pantomiming intercourse.

After that, she says, he continued to grope her and push her for sex.

Ansari reportedly sent Grace a text the following day, to which she claims to have responded, in part: “Last night might’ve been fun for you it wasn’t for me. When we got back to your place, you ignored clear non-verbal cues; you kept going with advances. You had to have noticed I was uncomfortable.”

Babe shared the alleged text exchange as a video on Twitter and Instagram. In it, a contact saved as Aziz responds: “I’m so sad to hear this. All I can say is, it would never be my intention to make you or anyone feel the way you described. Clearly, I misread things in the moment and I’m truly sorry.”

Babe, which was launched in May 2016 and prides itself on personal essays and news of general interest to millennials, spoke to the first friends the subject described the incident to and reviewed the texts, confirming the phone number allegedly used by Ansari matches “his details on a searchable public register.”

On Twitter, the conversation quickly shifted from considerations of the veracity of the account to what it says about modern dating and consent. As author Jessica Valenti wrote on Twitter, “[P]art of what women are saying right now is that what the culture considers ‘normal’ sexual encounters are not working for us, and oftentimes harmful.”

I feel like this will get lost in the convo about if Aziz Ansari Did Sexual Assault – but that feeling when you you shut down and stop responding, and the guy just keeps going and you realize that he doesn't care if you're in your body or not? It's awful too.

Read this. “Woke baes” are canceled. Unfortunately, this behavior is not uncommon. https://t.co/BmEDzFEUxa

If you think the story about Aziz Ansari is just a "bad date" then you literally don't understand how complex rape and sexual assault can be. If a person is repeatedly telling and giving you indications they do not want to have sex w/ you, then you should stop & not try anything

Thread: The tweets about Aziz Ansari show how few people still understand how a consensual sexual encounter can become assault in the blink of an eye.

The thing about that Aziz Ansari story is almost every single woman has had that experience at least once in her dating life. #MeToo

Ansari has been widely regarded as one of the more woke men in the industry. The 34-year-old comedian has positioned himself in his standup as a sensitive, thoughtful counter to the “dumb dudes at the bar,” and he studied dating extensively for his 2015 book, Modern Romance: An Investigation.

Notably, an episode from his second season of Master of None involves a celebrity chef who gives his character a major break but is later accused of sexual misconduct, which many allege is based on his friend Louis C.K., who Ansari has yet to publically denounce. Ansari won a best actor award for the show at the Golden Globes earlier this month, wearing a Time’s Up pin to the event.

Ansari has yet to comment publicly on the allegations.

Editor’s Note: This story has been updated throughout for clarity.