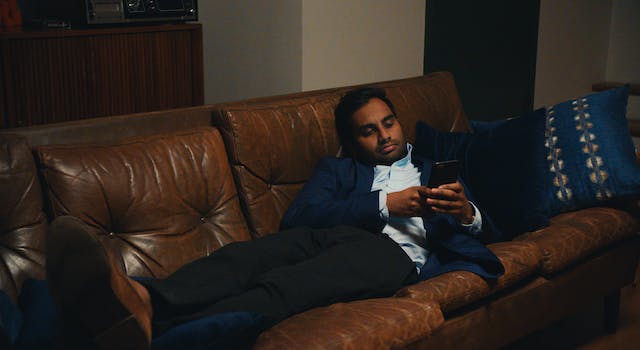 Aziz's meta thrill ride pulls out all the stops.

In its second season, Master of None bolts in many directions.

This isn’t a bad thing, necessarily. In season 1, we followed Aziz Ansari’s Dev as he tries to be an actor and find love. It was very much a series about modern entanglements, as well as representation and family. Season 2 opens with a black-and-white episode that nods to Italian films like Bicycle Thieves and makes you wonder where it’s all going.

We learn Dev has been living in Italy for three months studying pasta-making, ostensibly because he can—he’s playing a characterization of himself. There are charming shots of the countryside and interactions with wisecracking kids, but it feels so out of sync with season 1 that it might turn some viewers off. In episode 2, there’s finally some structure as Dev is reunited with big bud Arnold (Eric Wareheim).

By episode 3, the series feels more familiar as Dev returns to New York City and becomes host of a reality show called Clash of the Cupcakes. Here the series returns to its strengths, like Dev’s interactions with his family. Episode 4 focuses on a series of first dates and the casualness of the swipe. More importantly, it lets women discuss their experiences on dating apps (in the show it’s ominously called “the app”), which include harassment and fetishization.

Food was a supporting character in the first season and that doesn’t change. Dev’s Food TV boss Chef Jeff is a Bourdain-esque figure played by Bobby Cannavale, and food is portrayed as a generational thread. He’s resistant to his boss trying to lock him into a seven-season deal on a flimsy cupcake show (perhaps a nod to his seven seasons on Parks and Recreation), though he manages to snag a cool show where he and his cool boss hang out and eat cool food across the globe. (Chef Jeff turns out to be not very cool, and the show takes a jab at the lack of diversity on food shows.)

Over 10 episodes, the series pivots away from any definitive narrative thread. In a standout episode, Denise (Lena Waithe) comes out to her mother (Angela Bassett), who doesn’t immediately take to the news. We see their relationship evolve over a series of Thanksgivings. Elsewhere an episode is devoted to the lives of new characters: a doorman, a cashier who’s hearing impaired, and cab drivers who live together, illustrating the threaded lives of New Yorkers (connected here by faux Nic Cage film Death Castle).

Where is it all going? It’s not entirely outlined in season 2, though it’s certainly more ambitious, as co-creator Alan Yang predicted. Plot lines pick up and drop off, and we see a different side of Dev, especially toward the end. It’s easier to drop in and out of this season, and perhaps there’s some relief in not knowing where it’s going.