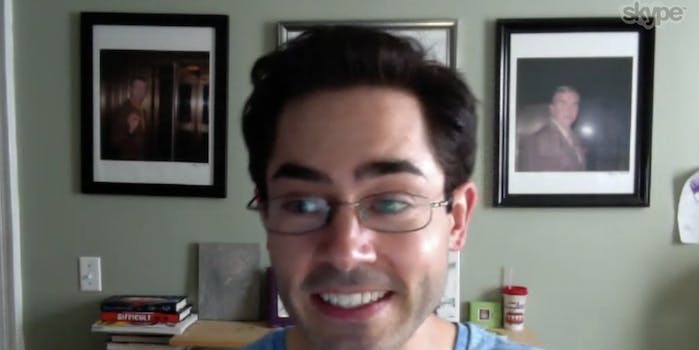 Mark Malkoff spent three crazed days trying to Skype with one person in every single country.

Stunt comedian Mark Malkoff spent three crazed days talking to people from more than 160 countries in an effort to Skype with one person in every single country.

Released in conjunction with Skype’s 10th anniversary, the resulting cut of his conversations from across the globe is ingenius and incredibly heartwarming, giving a small glimpse of the commonalities that bind us altogether.

When asked what they most wanted for the people of the world, almost everyone answered some form of “happiness” and “peace.”

And they were keen to show off objects and people special to their country and lives. A man in Belize showed Malkoff his view of the mountains, a man from Sweden showcased an ABBA album, and a little girl in Nepal showed Malkoff her pet cat. Malkoff even managed to Skype with a woman in North Korea who was attending a football match.

In an interview today, fittingly on Skype, Malkoff told the Dot he found people from countries he was missing by searching Twitter bios and tweeting to strangers. He said that the project has profoundly changed him.

“I want to start traveling and seeing more,” he said. “I also learned the importance of being a gracious host. Some of these people invited me to stay in their homes. Yes, there’s some cultural and language stuff, but a smile is universal and every call was just a bright smile.”