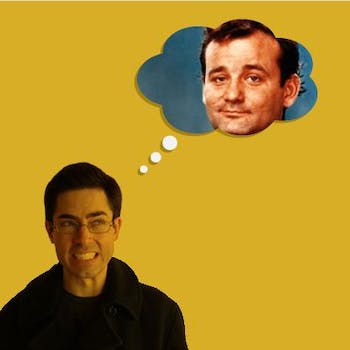 How far will Malkoff go to make it happen? You're about to find out—on YouTube.

If you could invite any celebrity over for dinner—dead or alive—who would you call?

For Mark Malkoff, the answer’s Bill Murray—and it’s not even close.

In fact, Malkoff so badly wants Bill Murray to come over for dinner that he’s created a Web series, The Bill Murray Show Starring Mark Malkoff, which premieres today on My Damn Channel. On it, Malkoff will document his efforts to coax Bill Murray into his apartment in Queens, New York, through a string of weekly shorts that will continue until the iconic comedians says “Yes.” (It could turn into quite the long-running show.)

You remember Mark Malkoff, right? The guy who went to 171 Starbucks franchises in Manhattan in a single day and followed that up by moving into a New Jersey IKEA for a week. The guy who drove around the country pleading with United States mayors to give him a key to the city, incited 155 New Yorkers to carry him 9.4 miles, and did his damnedest to get kicked out of SoHo’s Apple Store.

Now, he wants to bring Bill Murray to the apartment he shares with his wife to cook him dinner. And he’s willing to do whatever it takes short of stalking the man outside his Chicago home in order to make this dinner happen.

“I’m actually feeling pretty good about it,” Malkoff told the Daily Dot. “Nobody has said that they don’t think Bill Murray will say ‘yes.’ I think it will just take some polite persistence, which I’m good at, to get him on board.”

Off screen, the adventure’s already begun. When we spoke in July, Malkoff revealed that he’d recently taken a number of efforts to get through to Bill Murray: He’s solicited the help of friends, left a message on the actor’s famous 1-800 hotline, and set up a “Bill Murray tip hotline for people who have seen him.”

“It’s almost like ‘Six Degrees of Kevin Bacon,’” Malkoff said. “I haven’t even done the first show, and I already have people who have messaged me.”

Aside from the weekly status reports on whether or not he’s gotten in touch with the Moonrise Kingdom star, Malkoff plans to populate the show with a weekly adventure and guest appearances from “people who have met him.”

“One of my friends used to park his car at the country club,” Malkoff said. “Hopefully, he’ll be able to help.”

If nothing else, maybe that friend could offer some insight into Murray’s diet. Malkoff said that he’s done all he can to make the meal a possibility—his door is open and the offer’s on the table, as is the silverware. Now he has to figure out what he’s going to cook.

“I have no idea what Bill Murray wants to eat,” he said, “but that would definitely help me with my dinner preparations. If anybody has any idea, please let me know.”

Make sure to hit him on his hotline. He’ll be checking it often.

Godspeed, Mark Malkoff. We wish you nothing but the best in dinner guests.