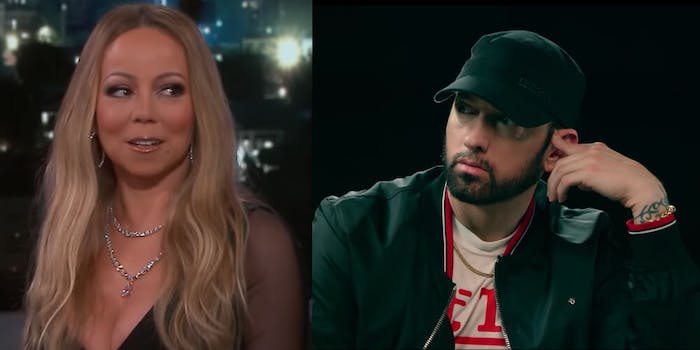 Carey has since responded.

The feud between the two artists dates back nearly two decades when Carey approached Eminem in 2001 to collaborate on Charmbracelet. The would-be collaboration fell through, however, when the latter insinuated a romantic relationship with the former. (For her part, Carey has always vehemently asserted that the relationship was purely professional.) The feud was even fueled as recently last month when Carey’s ex Nick Cannon made an ill-advised attempt to reignite it with a series of diss tracks.

But one thing is for damn sure—if Carey herself was going to weigh in on the ongoing situation with Eminem, it would be a hell of a lot more subtle than with a series of vulgar tweets.

It didn’t take long for Mimi’s 21.4 million Twitter followers to deduce that her account was hacked on Tuesday afternoon when “Mariah Carey” began tweeting about Eminem having a small penis, as well as several posts containing the N-word. The offending tweets were quickly removed, but not before some fans were able to capture screenshots for posterity, or what have you.

“LMAOOOOO the tweets are being deleted now but December 31st 2019 will go down as the day Mariah Carey’s Twitter got hacked,” one Twitter user wrote.

LMAOOOOO the tweets are being deleted now but December 31st 2019 will go down as the day Mariah Carey's Twitter got hacked pic.twitter.com/dvHu7jfj3q

Well, that’s one way of ringing in a new decade.

According to the Hollywood Reporter, some of the hacked tweets referenced “the Chuckling Squad,” the same group that targeted the account of Twitter CEO Jack Dorsey in August. (The group has also claimed responsibility for hacking other celebrity accounts such as Chloë Grace Moretz.)

“As soon as we were made aware of the issue, we locked the compromised account and are currently investigating the situation,” a Twitter spokesperson said, per the Hollywood Reporter.

Apparently, Carey was asleep while all this was going down. “I take a freaking nap and this happens?” the diva tweeted on New Year’s Eve.

I take a freaking nap and this happens?

At least she had a good sense of humor about it?

Likewise, Carey did not let the scandal ruin her New Years, which was apparently spent in Punta Cana. “Hello 2020!” she posted on Instagram Wednesday, along with a drone video showing off her tropic locale. “Cheers, toast, bravo to a spectacular new year!!”

We’d expect little else from Carey—may her 2020 be full of naps and free of drama.