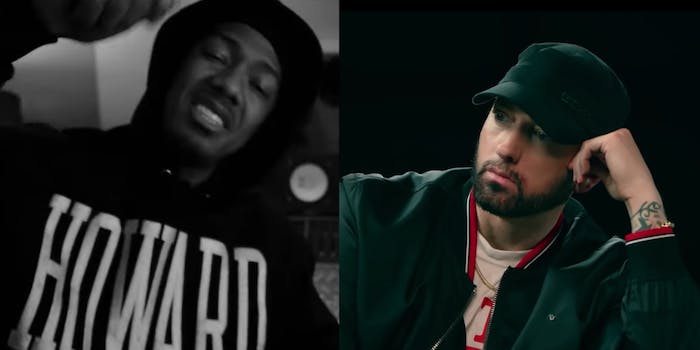 Nick Cannon is taking aim at Eminem’s past in yet another diss track released on Thursday.

The song, titled “Canceled,” points to a rhyme made by Eminem prior to his fame, in which he states, among other things, that “Black girls are dumb.”

Cannon’s song, his third diss track against Eminem this month, samples the disparaging comment and also accuses the Detroit rapper of being racist.

Eminem previously apologized for the remarks in 2003, blaming the lyrics on his “anger, stupidity, and frustration.”

“The tape… was something I made out of anger, stupidity, and frustration when I was a teenager. I’d just broken up with my girlfriend, who was African American, and I reacted like the angry, stupid kid I was,” Eminem said at the time. “I hope people will take it for the foolishness that it was, not for what somebody is trying to make it into today.”

But the pushback doesn’t seem to bother Cannon. Just last week while on the set of his MTV show Wild ‘n Out, Cannon reportedly commandeered a DJ booth to play one of his other diss tracks, “The Invitation,” an estimated “20 times.”

Cannon also released this month a diss track called “Pray For Him,” which likewise failed to receive praise from music fans.

The beef between the two stems back to 2009 when Eminem took shots at Cannon and his then-wife Mariah Carey on the track “Bagpipes from Baghdad.” Eminem claims to have dated Carey despite the female singer’s repeated denials.

After a volley of diss tracks from Eminem, Cannon, and Carey over the years, the feud was reignited at the beginning of December when Eminem called Carey a “nut job” on “Lord Above.” Cannon, whose relationship with Carey ended in 2014, has been on the attack ever since.