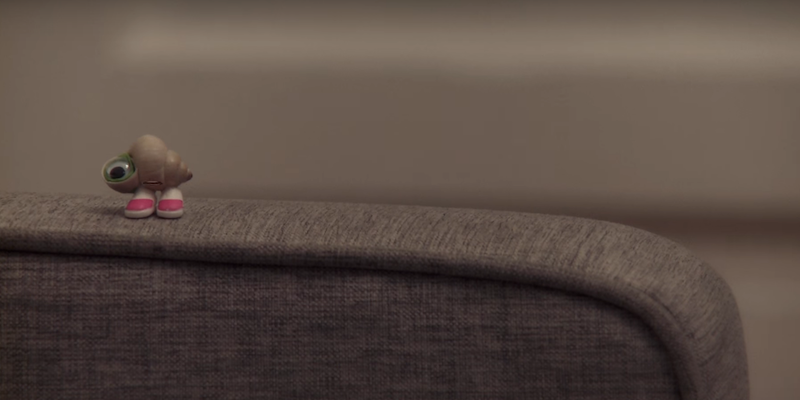 10 fascinating facts about Marcel the Shell

Here are a few interesting facts about everyone's favorite little mollusk and his origin story.

When Marcel the Shell With Shoes On debuted in 2010, no one could have predicted that we’d still be in love with the plucky little mollusk more than 28 million views later.

The certified-viral short, created by then-boyfriend-and-girlfriend Dean Fleischer-Camp and Jenny Slate, told the story of Marcel, an animated shell with one eye, comfy doll shoes, and a positive worldview. Slate voices Marcel with optimism and curiosity, though occasionally dips into quirky asides and existential questions about life. The stop-motion animation spawned two more shorts and two children’s books.

Here are a few interesting facts about Marcel the Shell and his origin story.

1) Marcel was inspired by kids’ books they loved

In an interview with Flavorwire, Slate and Fleischer-Camp cited books like Sylvester and the Magic Pebble; One Morning in Maine; Lyle, Lyle, Crocodile; and Blueberries for Sal as inspirational, as well as the art of children’s book illustrator Chris Van Allsburg.

Slate was let go from SNL in 2010, after swearing in a sketch. In a 2014 interview, she explained that making Marcel was her way of rechanneling energy in the wake of the firing, when she was just starting out in the entertainment business. “Nobody can stop you from being creative,” she said.

Marcel started off as voice Slate did when she felt “small.” As she explained in a 2011 interview: “Marcel’s voice was certainly the first thing to pop up, and because it was so fun for [me] to do, and for Dean to interview, we began writing things down. It was just kind of fun to be around Marcel.”

4) Much of Marcel’s dialogue is improvised

Slate told the Washington Post that she and Fleischer-Camp keep the lines of communication open: “Like the ‘Life’s a party, rock your body’ quip. We’re constantly bouncing ideas around in our heads.” The name Marcel was also improvised.

5) A Marcel movie was rumored to be in the works

In a 2014 interview with MTV, promoting her film Obvious Child, Slate revealed a feature-length Marcel movie was a possibility. In a 2014 interview with Vice, Fleischer-Camp said a “bigger Marcel project” was still “in its infancy.” There was also a rumored TV series. It’s not clear if either project will see the light of day: Slate and Fleischer-Camp divorced in 2016.

6) Slate and Fleischer-Camp did another webseries in 2013

Catherine, a 12-episode webseries done in collaboration with comedy channel JASH, finds Slate playing the titular character, who returns to her office job after an unexplained absence. It’s abstract, low on dialogue, and feels like an alternative-reality soap opera. Slate said the idea for the character came to her when she was stoned: “What is it when you’re not trying to do anything? You’re not trying to be boring; you’re not necessarily trying to be funny. You’re just existing somewhere in the middle.”

After Marcel, Slate lent her voice to many other animated projects: Bob’s Burgers, Lego Batman Movie, Zootopia, The Lorax, HBO’s Animals, and The Secret Life of Pets.

The origin of Fraud is fascinating: Between 2008 and 2015, a man named Gary uploaded hours of videos of his family and their quest for material goods. This quest includes mounting debt and an increasingly fraught family scam, but Fleischer-Camp re-edited the footage to create a new narrative that smudges reality. In an interview with Paste, he explained the allure: “We live in an irony-laden world. There is simplicity in Gary’s home videos. He documents the simple pleasures in life where everyone else is putting up a facade. On the internet, people are really curating their image or their brand, and it’s really self-conscious, and Gary’s is vulnerable and beautiful in that way. That’s very rare these days.”

9) Slate was hired to write a Looney Tunes reboot

In 2012, Slate was brought on to write the script for an untitled Warner Bros. reboot, but the film never happened. In 2014, Slate explained she wasn’t sure she was the right fit for a film that needed to be more “mainstream” and “formulaic.”

10) Of course, there are Marcel parodies

Marcel is so inspirational, he incited other inanimate objects to upload videos to YouTube. Noodles, optometry lenses, and toy turtles have all told their stories.