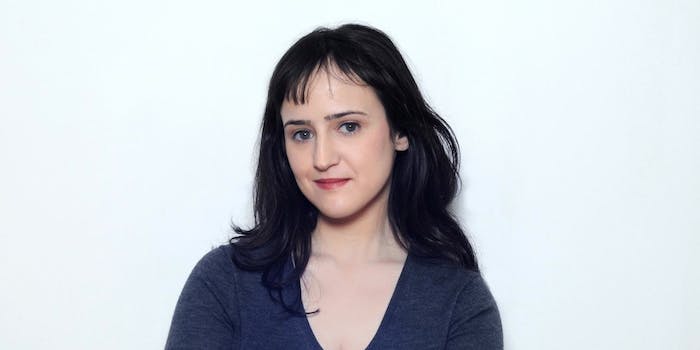 What is Mara Wilson afraid of?

The writer and storyteller shares her biggest insecurities on stage once a month. Here’s a preview.

By the time Mara Wilson was 10 years old, she’d played beloved characters in Matilda, Miracle on 34th Street, and Mrs. Doubtfire. What do you do after reaching that level of success in film at such a young age? Drop everything and become a writer and storyteller. Wilson, 27, hosts a live show in Brooklyn called What Are You Afraid Of?. She’s got a book of essays, (K) for Kid, coming out in 2016. She manages two cats and a Twitter account, @marawritesstuff. We caught up with Wilson about her latest projects and how they’re going. (If you are upset we didn’t ask the “right” questions, you might find your answers on her FAQ.)

Tell me about your show, What Are You Afraid Of? How did you come up with the idea?

I’ve always been an extremely anxious person. I have panic attacks, I have OCD, I’ve always been nervous. I’ve always had a lot of really strange fears, most of which I’m embarrassed to admit. I feel like I’ve seen a lot of comedy in New York and lot of storytelling in New York that is about fear. Fear is an essential part of New York life. Neurotic people, that’s what we are, that’s why I live here. Although sometimes it becomes too much for me and I’m like, that’s it, I’ve got to move somewhere less neurotic.

So I was thinking to myself one day, obsessing about one thing, and I was like, “I’m so afraid of everything. I could do a whole show about everything I’m afraid of.” Then I thought, “Actually…”

I’d been doing storytelling for about a year and half then. I decided I wanted to make it happen and I started to pitch it around to my friends. I told them I wanted to call it What Are You Afraid Of? or The Chickenshit Show, although one of them is more marketing-friendly.

I open the show speaking about somebody’s fears, usually mine. Then we do an interview with an expert on the subject. The last show we did was about Ebola and I talked about reading The Hot Zone in high school and how terrified I was of it. Then we had a virologist come up and talk about how unlikely we were to get Ebola. 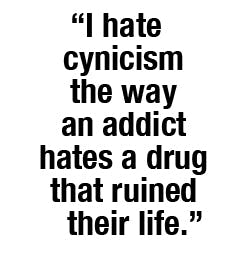 What is the format like for the rest of the show?

It always opens with me. Then we move on and have other comedians and storytellers come up. Though I prefer storytelling. Storytelling and comedy are a little bit different. Stories to me need to involve an arc; there needs to be a change. It can be a change in you, it can be a change in other people. If you’re just saying, “This happened,” that’s great, but that’s an anecdote, not a story.

Some of the bravest comedians I know won’t tell a personal story about themselves, just anecdotes. I think a lot of that is fear.

I completely understand that. Comedy in a lot of ways is a mask. I’ve spent a lot of my life being this sarcastic, funny girl—that’s another reason why I like this show. There is something beautiful and painful about being so vulnerable. I was a very cynical teenager. I hate cynicism the way an addict hates a drug that ruined their life: it made me miserable and it made everyone around me miserable, and it accomplished nothing. It wasn’t even constructive or anti-anything, it was just completely unsustainable and unhelpful. Now that I’m actually taking chances, taking risks and admitting to my faults, I can move on and be a better person. I feel a lot better.

There are a lot of people who think to be funny is to be edgy. I think that’s incredibly lazy. Those types of people wouldn’t do well on my show, because that’s not what it’s about. It’s about revealing yourself. It’s about letting your guard down. That’s why I like doing it.

I think a lot of people need to think about the audience. A lot of people, I think, don’t. They play everything out to an audience, because of social media, because of everything. There’s not a filter; everyone’s just putting it out there. They don’t actually consider what is actually interesting to an audience, or what the audience is getting out of it.

Which is why you get teenagers tweeting stupid, dangerous things. They’re just not thinking about it.

Twitter is such an interesting creature that we have! It’s a medium to create  something. There are a lot of Twitter accounts that I love—I love your Twitter—but Twitter itself makes me a little anxious.

I can completely understand that. [What you put online is] something that they really need to start talking to children about in schools. My dad used to work for a radio station back in the ’70s, and they always told him, “WGAS: Who Gives a Shit.” That’s actually a really good motto. There’s a line between what’s raw and what’s real and what’s actually interesting to people. I think good work needs to be filtered. That’s a line I try to walk a lot.

Do you feel you’ve achieved that with your show?

People will see the show and realize that they’re not alone, that they’re not the only person afraid of these things, that they can overcome it. One of the worst things about being afraid is it’s the loneliest you can feel. We feel like it’s just us against this thing and that we can’t explain it to anyone else. It’s a wholly individualistic experience.

To me, one of the coolest things about comedy is its relatability. Your show is doing that. It’s a wonderful space to create for people.

Yeah, I was really shocked that this didn’t exist in this form already.

A lot of times, anxiety treatments can be so cheesy. You have to sit through an exercise about being under a magical waterfall, but it’s not just water anymore, it’s joy! It’s hard, because I want the help, but I can’t take it seriously. Something in my body stops me.

While I do those exercises, I have to stop fighting it and just embrace the cheesiness of it. I feel like, if I want it to work, I have to believe in it. Fighting it can prevent you from getting help. At the same time though I also want to laugh and I want it to be funny. I lead the audience in breathing exercises, and one of the problems with breathing incorrectly is people breathe up, they don’t breathe out. I always ask someone in the crowd to breathe for me and I tell them they’re doing it wrong. It gets a laugh every time.

When a live show is going really well it’s like you’re flirting with the audience. You’re teasing them a little bit, but you both really want to be there. I know a lot of people who really want to piss off their audiences, who want to provoke them. I think there is a time and a place for it, but that’s not what I’m about. I want to treat my audiences like they are in a safe space. I want it to be like you’re coming into my home and I’m telling you a story.

Do you see a lot of the same fears over and over again?

It usually comes back to a few different things. Every time I tell someone I have a show called What Are You Afraid Of?, they go, “Oh, you know, I’m really afraid of scorpions,” or “I have a serious fear of clowns.” Which I guess is what I get for naming my show a rhetorical question.

What I’ve found is a lot of fears are about loss of control. Embarrassment is loss of control, getting sick is loss of control, and death is the ultimate loss of control. I’ve always been a little bit morbid. I don’t shy away from the more morbid fears. We had a wonderful storyteller, Peter Aguero, recently tell a beautiful story about fearing he’d lose his temper. Peter is, like, six-five. He’s a big guy, and I’m a five-foot-zero woman, but I knew exactly what he was talking about: that fear of losing control, like you’re going to go punch a wall or something like that. It’s universal.

Is your book going to have anything to do with the topic of fear and anxiety?

It’s mostly about my childhood and adolescence. The title is (K) for Kid, because they used to put a (K) by my name on a call sheet. I think they really only did that on sets where I was the only child actor, like on Melrose Place. That way they could differentiate me. The book will be about my childhood, but not just the acting. That was a big part of my life.

There is definitely going to be talk about anxiety, because I was a very anxious kid. I had OCD really badly; I dealt with that for a very long time. I really think it’s important to talk about it. If you’ve come out the other side, if you’ve dealt with it, you can say, “Hey, I want through this. It sucks, but I’m dealing with it.”

I’ll be talking about other things too: getting my heart broken, bombing on stage, and Mean Girls stuff I encountered in high school. There will be tons of things like that. I’ll also be talking about filming Matilda and Mrs. Doubtfire, traveling to Europe to promote the movie, and feeling out of place. That’s what a lot of stories are: feeling a little out of place, feeling like you shouldn’t be there.

There’s a balance I’m trying to strike. A lot of people who are quasi-famous are like, “I’m just like you!” And they’re not. But in some ways I think I am. I’ve never considered myself a famous person, I still really don’t. Everytime I think, “Oh, yeah, I guess I did make a difference to someone. Maybe I was famous!,” something happens and it knocks me off the pedestal. It’s really hard for me to gauge. I have hardcore imposter syndrome. My stories are things I think are interesting, and I have a whole group of friends who will tell me if they’re not. Like I said, I think there are a lot of things out there that are really raw and unfiltered, and I think there’s something really interesting to that. But it’s hard to make raw and unfiltered art when so much of what the world is giving away right now on social media is already raw and unfiltered. It takes a little bit of restraint and a little bit of control. It’s all about striking a balance. I know that’s a platitude, but it’s true.

Is there anything else that you want to put out into the universe?

The book won’t be out until 2016, because I still need to finish writing it. What Are You Afraid Of? happens the third Sunday of every month at Union Hall [in Brooklyn, N.Y.]. I’ve also done the show at colleges; that’s something I would like to do more in the future. I think it would resonate with a lot of young people.

Claire Linic is a Chicago-based comedian, crier, and friend. Her book, The Awkward Phase, will be coming out through Skyhorse in fall 2015. You can submit your triumphant stories of awkward youth to [email protected]. Claire can be found either at @clairermeyer or @wefoughtabout.

Photo of Wilson by Ari Scott