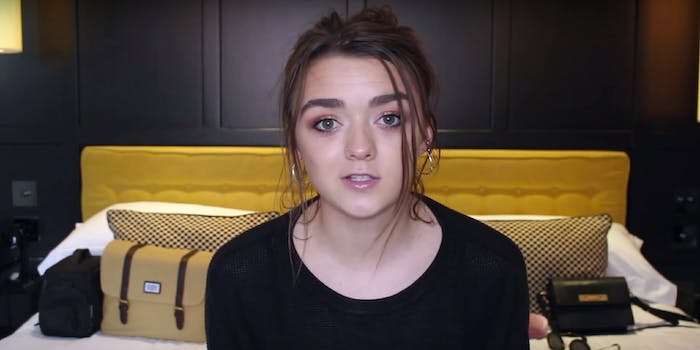 This has been a long time coming.

Game of Thrones actress Maisie Williams may play a budding assassin by day, but by night, she’s taking on a different role: YouTuber.

The 18-year-old actress launched her new YouTube channel with a Q&A video early Tuesday, explaining that it was a way to celebrate her one million Twitter followers. But Williams also has ties to the YouTube community—she’s appeared on multiple episodes of the Fine Brothers’ Teens React and has guest-starred in videos with Caspar Lee and SUPERFRUIT (Pentatonix’s Scott Hoying and Mitch Grassi).

“I have a lot of friends who are in YouTube, and I just find it really, really interesting what they do and I thought I’d give it a shot myself,” Williams explained.

Although Williams said that she wouldn’t be posting on a regular basis, she plans to use her channel to share anything that makes her laugh, plus short sketches and likely more Q&As. In the video below, she covers everything from Game of Thrones and Arya’s blind contacts to questions about her personal life and embarrassing moments in the business—along with a cameo from her TV sister Sophie Turner.

Many of Williams’ fans weren’t surprise to see her start a YouTube channel; she been tweeting about it for some time now, beginning with figuring out the logistics of it.

As she’s demonstrated, she’s already having a pretty authentic YouTube experience. From asking her fans for questions for her first video…

Okay, it's happening. Please send any questions you have for me using #AskMaisie

…to getting used to the editing process…

Just a heads up- I am new to editing and uploading etc. so this may take a week or so to get the channel up and running…

…and experiencing the many woes that come with editing.

Pretty embarrassing how long it's taking me to get my channel running, but with A LOT of help from @Skulburn , I'm slowly getting there. X

She also had plenty of teases for the people who were awaiting her first video.

Guys. The @YouTube vid is done (and has been for a while) just waiting on an official URL for you all!

But just with so many other YouTubers, even when everything finally went according to plan, some technical difficulties still occured.