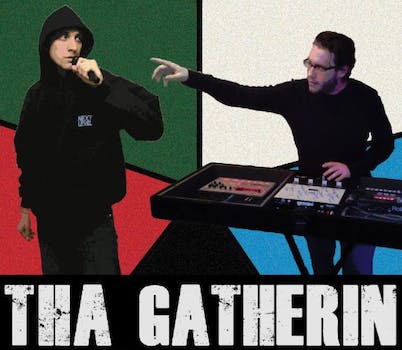 Rapping about Magic:The Gathering may not get these rappers a top 40 hit, but likeminded listeners keep pressing "play."

Bill Boulden knows there’s something inherently funny in rapping about card games. But the Buffalo native’s passion — both for music and for Magic: The Gathering — is no joke. His rap duo, Tha Gatherin, is a labor of love.

“I thought, what would a rapper’s Magic name be? It started as a funny idea,” said Boulden. “The sheer ridiculousness of it is lovable in itself.”

Boulden aka “Spruke”, along with his music partner, Patrick Chapin aka “The Innovator,” create rap songs about whatever’s on the pulse of the Magic: The Gathering community. Whether they rap about road tripping to the next tournament or just drooling over the latest rare card, their songs use Boulden’s experience as a casual player and Chapin’s experience as a professional to tap into what Boulden calls the “Magic lifestyle.” The result is a musical effort with a cult following.

“It’s not just a game anymore. It’s a really meaningful part of people,” he said. “It’s being part of this community of people that love Magic and being able to give something back to it.”

At 26, Boulden has been DJing and creating music since 8th grade. Last year, he Facebooked Chapin about joining his group and the pro player responded willingly. Boulden immortalized their duo in Hymn to Tourach:

Even never was On Tha Pro Tour!
And now Tha Gatherin finally explode, yo?
Disc on StarCity and iTunes upload?
Guess a bedroom DJ just need Chapin to help him
Started with a Facebook message
End with an album

Since the album launched in May, their marketing effort has been two pronged. They release music videos on Spruke’s YouTube channel, where the five videos they’ve posted so far have netted 155,000 views. Boulden attributes this success to the uniqueness of Tha Gatherin’s content. While many artists sing about love, he said, there’s only one group fans go to for raps about card games.

Their over-the-top nerdy lyrics don’t resonate with everyone, but Boulden said he’s become immune to haters.

“When somebody takes the time to hate, they’re committed enough to take the time to dislike you better than going unnoticed. It’s like Rebecca Black, not that i want to compare myself to her,” he said. “People will go ‘LOL autotune,’ but guess what they’re humming later that day.”

Boulden would not reveal how many albums have been sold, but promised it was “enough to have had made it worth all my time.”

The group also uses their Twitter handle, @ThaGatherin, to freestyle about new developments in Magic news on the fly.

For example, after a Gizmodo intern dissed a Magic pro online, also known as Finkelgate, he offered this:

“Finkelgate was only on the news for an hour before people started saying, ‘If Tha Gatherin doesn’t get some rhymes down about this I’ll be disappointed,” said Boulden. “They called me. I attribute so much of our success to that.”

Boulden also said fans have helped by bringing some of Tha Gatherin’s lyrics into the Magic community’s vocabulary. Phrases from his songs have become shortcuts to describing shared experiences among Magic players.

“Our song Still had all deez is autobiographical. It’s about playing against an opponent with bad sportsmanship who gloats after he beats you.  Everyone associated with that to such an extent that ‘still had all deez’ has become a part of the magic lexicon,” he said.

At tournaments, Boulden said, fans now recognize him and ask him to perform. He said his day was made when a fan and his two young children asked him to perform his song, Check yourself before you Phyrexia self.

“The guy said his kids were singing Phyrexia self all the way to the tournament and they were so excited to meet me,” he said. “It was so great to see fans coming in all ages now.”

For Boulden, the fandom has made a followup album essential. He said he can’t promise Tha Gatherin 2 will be taking fan requests, but “there’s no way it can’t be about the fans.” Boulden said the community’s passion for Magic is what will continue to drive his music.

“It’s about completely diving headfirst into a hobby and not caring what other people think. Hey, we’re having fun down here, you know.”