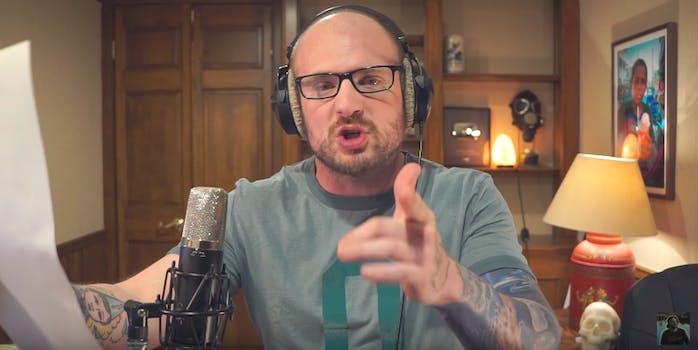 'I'm different, I know that I’m different, but I still care about you and our friendship.'

Mac Lethal understands the power of a viral video. Since scoring more than 36 million views on a 2011 clip that featured him making pancakes and rapping over the beat to Chris Brown’s “Look at Me Now,” the 35-year-old MC has used his YouTube channel to document pizza orders, teach grammar lessons, and offer relationship advice.

On his latest video, the Irish rapper from Kansas City, Missouri, functions as a mouthpiece for an 11-year-old boy named Isaac, who wrote a rap to address his bully, Thomas, but was too shy to perform it himself.

Isaac sent the lyrics to Lethal (real name: David McCleary Sheldon) and asked him to consider performing the song. From the sound of it, the kid’s caught a lot of grief from his tormentor. He’s been beat up after school, mocked for not liking sports, and harassed in front of all his friends in class after letting Thomas copy his math homework.

Of course it’s cliche at this point to suggest that suffering produces the best art, and while no child should ever have to endure such bullying, there’s no denying that Isaac has an uncanny gift for playful lyricism and writing catchy hooks. He extends an olive branch in the singsong chorus: “I’m different, I know that I’m different, but I still care about you and our friendship.”

The track itself is a breezy romp, bolstered by languid guitar chords and occasional keyboard flourishes that recall Anderson Paak’s Malibu. Lethal’s earnest delivery lends the subject matter the weight it deserves.

The rapper has independently released several albums, EPs, and mixtapes since 2001, turning down offers from major labels along the way. His ability to address his audience directly through his inventive YouTube videos proves that perhaps he’s better off that way.