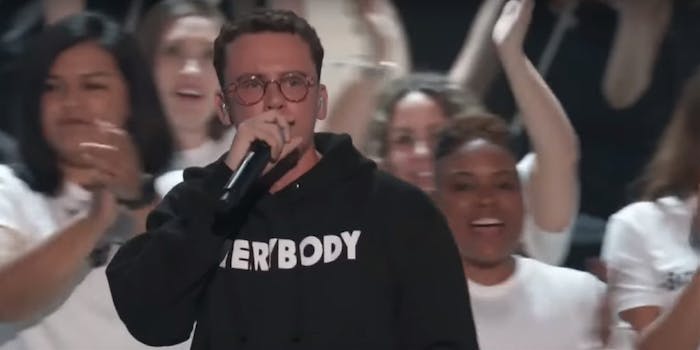 Apparently a lot of people can relate.

When Logic performed his single “1-800-273-8255” at the MTV Video Music Awards on Sunday, he was surrounded by survivors. They all repeated the number on their shirts, a signal to others who might be struggling. On the back was another: “You are not alone.”

The song, which uses the real number for the National Suicide Prevention Lifeline, has started to have an organic effect. It was reported calls to the hotline went up 50 percent after the VMA performance, but the NSPL has seen an uptick in calls and searches since the song debuted in April. Calls are reportedly up 33 percent from 2016, and activity on Facebook has tripled.

Logic just released a powerful video for the song, which tells a story from the point of view of someone contemplating suicide and someone wanting them to live. John Draper, director of the NSPL, said that on the day the single was released, the organization had its second-highest call volume ever.

Draper explains Logic got permission from the NSPL to use the number, and that “sometimes just knowing this service is there can make people feel more hopeful.” In a Genius video, Logic said he didn’t set out to save anyone, but fans started talking about how they related: “I wasn’t even trying to save your life. Now what could happen if I actually did?”