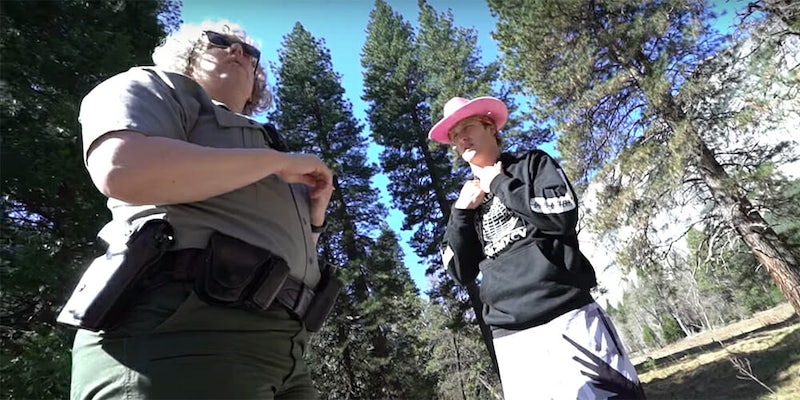 'Wasn’t the smartest or safest thing to do.'

Logan Paul was reportedly exhibiting more reckless behavior in a forest this weekend.

The YouTube star apparently loaded up his crew in a blue converted school bus he calls “The Cool Bus” and headed to Yosemite National Park for his 23rd birthday on Sunday. According to the Blast, park rangers stopped Paul and his friends because they were riding the bus—in a tent strapped to the top of it.

“Wasn’t the smartest or safest thing to do,” an official for the U.S. National Parks Service told the Blast.

According to the celebrity news site, the official also said Paul and his friends were cited for an “illegal operation” for riding on top of the bus. But Paul’s vlog says otherwise.

A video posted on Paul’s account Monday shows a park ranger reprimanding Paul for taking up multiple parking spots with the bus. The video also includes brief shots of the tent placed on top of the bus; however, Paul claims in the video that the park ranger did not issue him a ticket because it was his birthday.

The National Park Service did not immediately respond to the Daily Dot’s request for comment.

“Yes honey, yes guys we did not get a ticket!” Paul exclaims in the vlog, which also shows him and his friends swimming, four-wheeling, and being swarmed by fans—whom he calls the “Logang”— in the park.

Paul is still dealing with the consequences of filming the body of a suicide victim in a Japanese forest in December. The stunt cost the vlogger YouTube advertising privileges and brought condemnation on social media.