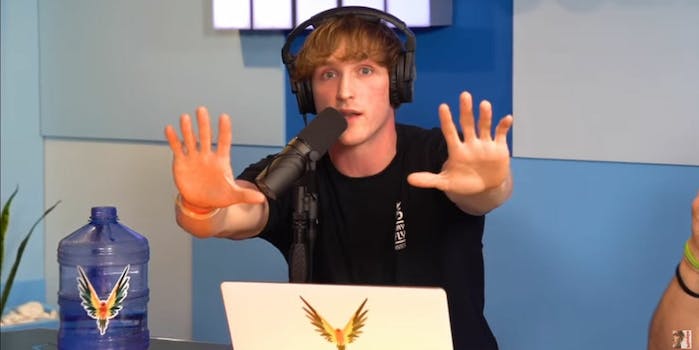 Kissing a bunch of guys doesn't make you an ally.

“Being gay is cool to me. I think that is a very cool thing.”

These were the words Logan Paul used to explain why earlier this month he told his more than 1 million subscribers that he would be “going gay” for the month of March. In the most recent episode of ImPaulsive, Paul sat down with Josh Seefried, an Air Force veteran and LGBTQ activist, to discuss his comments and why they received so much backlash online.

He still doesn’t really get it.

“You are a person that sets the tone of what is acceptable to make a joke of, and so when youth watch you and say ‘hey, Logan Paul made this joke’ that’s what kind of legitimizes bullying in school,” Seefried told Paul. As a gay man himself, he spent the podcast striving to explain to Paul why joking about homosexuality can be offensive to the LGBTQ community and their allies.

Paul acknowledged his mistake several times throughout the podcast, apologizing for what he called “a very poor choice of words.” He noted that he brought on Seefried—who harshly condemned Paul’s comments in a Jan. 11 tweet—in an attempt to better understand where he went wrong.

Obviously to @LoganPaul being gay is some sort of punchline to a joke. Make sure to tell that to youth that kill themselves because they struggle with being gay. Shame on him once again. https://t.co/7HE1t6AxC9

“Going gay is not a choice,” Paul said. “That is not what I implied by saying that. I think who you are attracted to is innate to who you are, that it’s genetic and that’s that.”

After Paul seemed to genuinely ask if experimenting with other men for the month of March would be acceptable, Seefried explained that Paul is free to explore his sexuality however he wishes: “If that’s what you’re choosing to do, is explore your sexuality, then we can have a discussion about that.”

Paul was never clear about his actual intentions to experiment, but Seefried explained that if that was his real intention, he needed to be more clear. Paul did his best to skirt around this, and after a solid five minutes of schooling from Seefried, managed to shift the focus of the conversation. He pointed to comments made by Joe Rogan on his own podcast a few days after Paul’s comments went viral, but Seefried wasn’t having it.

“Shame on you for trying to deflect your own actions,” Seefried said.

During the length of the 52-minute podcast, Paul and his companions strove to understand why his comments received the backlash they did. Over and over they asked Seefried if American society has reached a place where gay life cannot be joked about, which he repeatedly denied. They seemed genuinely interested in understanding why their jokes were offensive, even if they weren’t interested in taking responsibility for the offense caused.

What Seefried never managed to communicate to the group of men was the insidious nature behind these jokes. By saying that he wanted to “go gay” for a month, Paul was making homosexuality into a punchline. In doing so, not only did he ignore the real struggles gay people endure every day, but he reinforced the idea that homosexuality is abnormal.

Kissing a bunch of guys doesn’t make you an ally. Knowing gay people doesn’t make you an ally. Had we seen a far more remorseful Logan Paul, I think this podcast would have delivered exactly what the ImPaulsive team was going for. Unfortunately, Paul spent far too much of his time focusing on the hate he received in response to his comments. He pulled up numerous critical tweets and condemned them for the way they approached him.

If he had instead considered the reason so many LGBTQ people don’t feel that “being gay is cool,” perhaps this discussion could have paved new ground. But instead of delving into the reality of being gay in 2019—a landscape that his words make clear he doesn’t understand—he focused on the backlash his words received. Internet hate is absolutely a problem that needs to be tackled, but maybe Paul should do so in a podcast about incivility online, rather than his comments on homosexuality.

Still, in some of his statements, Paul seemed genuinely remorseful. He talked about how words affect people and his true desire to improve the conversations happening online. Though he seemed more upset by the response he got than the potential injury his words caused, Paul took the time to have a discussion on a topic not discussed enough. For that, at least, he should be applauded.