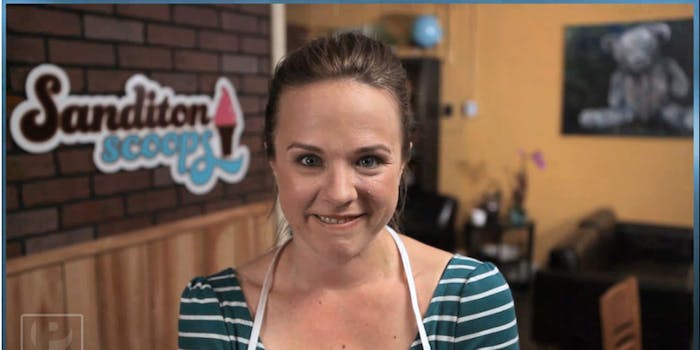 Fans of Gigi Darcy should definitely tune in to the new series from the LBD team.

Fans of the recently completed Lizzie Bennet Diaries are in luck, as one of their beloved characters from the hit webseries returns today with Sanditon, an all-new mini-series adaptation of Jane Austen’s only unfinished major work.

A teaser promo shortly after the end of the LBD, and a trailer last week expanded the production team’s universe of interconnected stories, as LBD character Gigi Darcy—more well-known as Georgiana Darcy from Pride and Prejudice—stepped out of her own YouTube series and into the worlds of other Austen stories.

A novel Austen began and abandoned just a few months before her death, Sanditon is, on the surface, the story of a developing seaside resort, perhaps similar to the seaside town of Worthing, where Austen spent some time. In the novel’s 11 existing chapters, however, Austen focuses less on the town’s real estate and more on the superficialities and distorted realities of the people who inhabit it, as they attempt to spread the town’s fame far and wide. In this sense, perhaps Sanditon owes more to Bath, another seaside resort that Austen spent time in—and loathed.

In the LBD team’s take on the story, Gigi becomes a major character who visits Sanditon under the guise of demonstrating new technology for her brother’s media company. Transmedia producer Alexandra Edwards, who worked on both the Diaries and Sanditon, tells the Daily Dot that the production team just didn’t want to let Gigi go:

I think we all felt a little attached to Gigi Darcy, who emerged during The Lizzie Bennet Diaries as a strong, sweet, fun, and smart character.  She deserved to [do] more than just serve as a vehicle for demonstrating George Wickham’s terrible behavior.  And the fans really responded to her, so we felt like that was a great way to kind of carry them into this miniseries.

Sanditon is meant to be a short teaser series before the LBD production team’s next “big” adaptation—whatever it may be. But whether or not the LBD team chooses to leave Sanditon unfinished or attempt to give it a conclusion, fans looking for a light summer romance may be in for a shock. Full of Austen’s typical sparkling and sometimes scathing social satire, Sanditon is nonetheless something of an outlier—not just because it’s unfinished, but because it doesn’t explicitly deal with romance. In fact, it’s been called an “anti-romance,” though almost all of the many attempts by modern writers to finish it have been romantic in nature. “There was vanity in all they did, as well as in all they endured,” Austen writes of the fairytale town’s inhabitants.

The novel’s shifting point of view makes it uniquely adaptable for the LBD’s vlog-style narrative format. In this adaptation, updates from the series’ all-new cast and interviews with Gigi and her smartphone seem to be replacing the novel’s epistolary format. The smartphone technology known as “Domino” proved to be something of a deus ex appina during the last leg of the LBD, but it’s also the window that will connect each of the universes to each other, presumably ensuring that LBD fans have plenty of reasons to keep watching this lesser-known sibling of Austen’s novels.

For the LBD Team to take on the task of bringing the town and all its quirky inhabitants to life is a daunting task, but in typical LBD form, they’ve thrown all their considerable transmedia resources at the project, creating Twitter accounts for all the characters, Facebook pages, numerous Tumblr accounts, and an interactive web page for the city complete with more video footage. And many of the fans have already responded by creating their own town characters and interacting with the town’s biggest events, such as the town’s ongoing rivalry with rival resort town, Dolphinton.

“My biggest hope for the show is that people respond to it,” says Edwards, “however they choose.

If they just want to watch Sanditon‘s story play out in the videos, that’s great.  Or, if they want to get more in-depth and become part of Sanditon, that’s also great.  I hope the world of Sanditon grows beyond our show, and keeps growing long after the miniseries has ended.