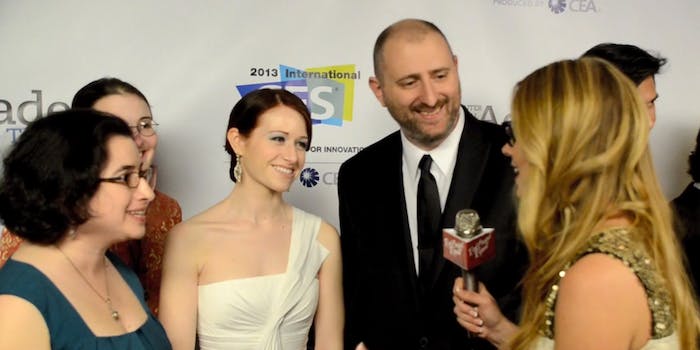 The acclaimed webseries was among the juried winners in the Academy's Creative Achievement in Interactive Media program.

The fine line between Internet entertainment and television just got even blurrier.

Producers Bernie Su and Jay Bushman, along with transmedia editor Alexandra Edwards, will receive the Emmy for Original Interactive Program, adding to a stacked trophy shelf that already includes  two Streamy Awards and an IAWTV Award.

The Lizzie Bennet Diaries, created by Su and Hank Green, started out as a video blog made by Lizzie Bennet and her best friend Charlotte Lu in March 2012, but with the help of transmedia, the characters’ stories were told through spin-off YouTube channels, Twitter, and other social media accounts.

Once the show ended in March 2013, a Kickstarter campaign helped fund a miniseries based on Sanditon, one of Jane Austen’s unfinished novels, where fans were invited to participate and become part of the story’s narrative. The team announced earlier this month that their next major webseries will be a take on Emma.

The team behind The Lizzie Bennet Diaries is ecstatic with the win and thanked the people who really made it happen: the fans.

Hugs, kisses, and awkward Vulcan salute fistbumps to the whole @TheLBDofficial family. The past year with you has been mind-blowing. #Emmy

huge congrats to the entire @TheLBDofficial family. the real honor has been working with you guys #Emmy

Hey @TheLBDofficial fans. Thank you for your passion and support through this journey. We couldn’t have done it without you. #Emmys

The winners will be presented during the Creative Arts Emmy Awards on Sept. 15.