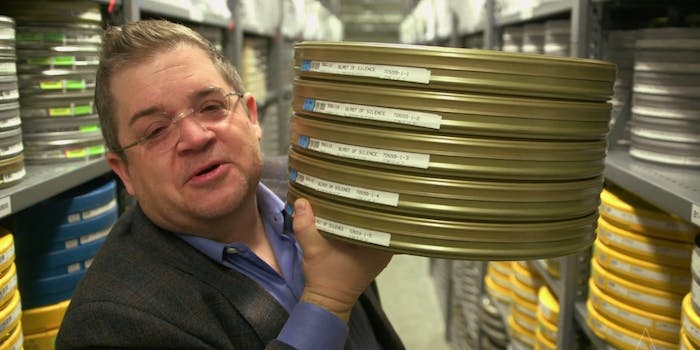 Who knew the Academy did something other than organize the Oscars?

Fresh from hosting this year’s Webby Awards, comedian and Twitter celebrity Patton Oswalt has just starred in a new webseries.

Let’s Go to the Movies With Patton Oswalt is produced by the Academy of Motion Picture Arts and Sciences (AMPAS), giving Oswalt the opportunity to choose any film from the Academy archive and screen it for private viewing. “It’s like picking out your own steak,” he said happily, walking through the canyons of antique film reels.

In the end, he selected the little-known 1961 noir movie Blast of Silence, about a hitman who travels to New York for a job and begins to have flashbacks to his childhood.

Oswalt watched the movie with fellow comedian Karen Kilgariff, and then discussed it in a topically noir-sounding cafe named the Shaky Alibi.

This webseries seems like a cool idea, giving people a chance to see what the Academy actually does, aside from organizing the Oscars. Patton Oswalt is a good choice of host for the first episode, since he clearly has passion for the topic of classic cinema, but also has the social media clout to draw in a bunch of viewers who otherwise would never had paid attention.

Correction: Patton Oswalt hosts only the first episode of the AMPAS’s new webseries. Other episodes include “‘Not Much to See’: How the Blind Enjoy Movies” and “Creative Spark: Tina Gordon Chism.”