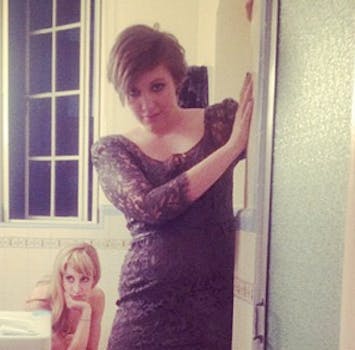 "I obviously don't find rape or murder funny, rather the concept of a trio of hapless people in poor taste halloween costumes,” Dunham tweeted.

Maybe Lena Dunham has finally learned not to treat Twitter as an open-mic night at a comedy club.

The Girls writer and star caught flack from Twitter users Wednesday for cracking a joke about dressing as a serial killer for Halloween. In a conversation between contemporaries Mindy Kaling and B.J. Novak, Kaling tweeted if the three wanted to dress up as the West Memphis Trio—a group of teenagers who were convicted of murdering three boys in the ‘90s, only to be released 18 years later after accepting Alford pleas.

Dunham tweeted back that Kaling and Novak should dress up as Canadian killers Paul Bernardo and Karla Homolka. The husband-and-wife duo were convicted in 1995 for kidnapping, raping, and murdering two teenagers.

“I’ll be her sister they murdered. Scariest! Luv U,” she responded.

“@lenadunham your tweet about the murders committed by Homolka and Bernardo is disgusting. I knew one of the victims and you’re way offside,” tweeted @LadySnarksalot.

Dunham apologized early Thursday in a slew of tweets, writing that the joke was a “throwaway as most 140 character thoughts.” She cited the 1996 film Karla as her historical reference.

“I obviously don’t find rape or murder funny, rather the concept of a trio of hapless people in poor taste halloween costumes,” she tweeted.

Dunham addressed the proverbial line that comedians have to tiptoe on and admitted she perhaps have stomped on top of it.

“I don’t mind creating debate with thoroughly considered artistic expressions but I don’t want to offend with a tweet. Sorry Charlies,” she conceited.

This isn’t the first the Tiny Furniture scribed pissed off people on Twitter. In August, she tweeted a picture of herself wearing a mock Muslim veil that some deemed offensive.