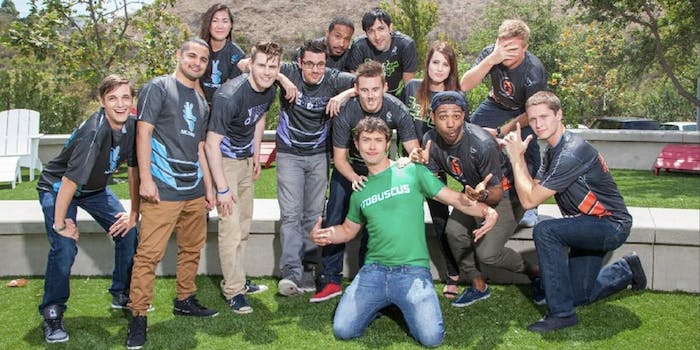 The U.S. version of ‘Legends of Gaming’ feels like a LAN party in your friend’s basement

The titans of YouTube face off in a video game battle to the death.

The worlds of professional gamer and YouTube gameplay star collide with Endemol Beyond’s Legends of Gaming, a new series that launched this week.

Legends of Gaming is a U.K. import that pits teams of two against each other in various video games, most of which the players are not experts in or perhaps have never played before. While the teams are coached by esports players like Johnathan “Fatal1ty” Wendel and Carl “Perfect Legend” White, the players themselves hail from YouTube’s sect of gamers, not the professional leagues. While the pros are on the sidelines shouting instructions, the players are sometimes accidentally using alternate controls, running into walls, and stuck on their weapons pages.

“It turns into the coach playing the game through the player; it’s freaking hilarious,” explained series host and YouTuber Toby Turner. “I spend a lot of time being bad at video games, and this is my chance to be the one who gets to make fun of other people who are not good. It’s implied that I would be good, but I’m definitely not.”

Collectively, the players involved represent 57 million subscribers across social platforms, giving the series a real shot at reaching the levels of success of its British predecessor, which is already in its second season. Filmed at the YouTube Space L.A., the episodes have the feel of a raucous LAN party in your friend’s basement.

The goal of Legends of Gaming isn’t to showcase the best of esports, but to make the world of esports feel more relatable to the casual gamers of YouTube.

“We’re catering to competitive game play, but with a hint of dirty casual in us,” said Witherspoon. “I can see casual gamers going, ‘I can watch this and understand what’s happening, and they play like me. Terribly!’”

The series is the first from Endemol Beyond’s newest network, SMASHER, a digital-first project that will exist across 20 platforms from YouTube to Go90 to TiVo. With a focus on esports and gaming, the network will launch a total of seven shows in the coming months.

Photo courtesy of Legends of Gaming