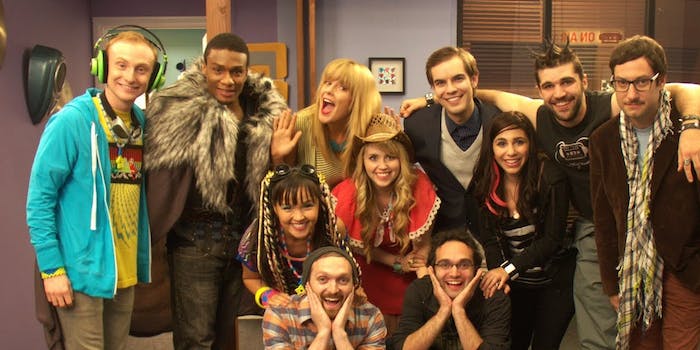 The premiere of season 2 introduced us to Idol’s cousin Carrie, now known as “Country.”

The premiere of the sitcom’s second season today introduced fans to Idol’s (Grace Helbig) cousin Carrie, now known as Country. She’s got a signature pink cowboy hat and a giant cross necklace making her music preferences obvious—but her past, and motives, remain unknown.

MyMusic, created and directed by YouTube’s prolific showrunning duo the Fine Brothers, is a workplace sitcom about a music studio and promotion company, but with transmedia elements that allow viewers to interact with the characters on social media like Twitter, Facebook and Google+. The characters on the show are all represented by different musical genres and given names that match. The company’s CEO is a hipster named “Indie,” for example, and their booking agents are ravers named “Techno” and “Dubstep.”

Before the season premiere, the Daily Dot caught up with Lee Newton, the SourceFed host and actress behind Country.

I’m surprised it took so long for MyMusic to introduce a Country character.

It was a much-wanted character apparently from a lot of comments last year. They all wanted a “Country Music,” so I was very glad to fill the place, as a country lover myself and a mountain girl.

Can you give us a hint about what Country gets up to this season? (At one point in the season 2 trailer, she has two broken arms.)

I can say all kinds of different shenanigans. For me as an actor, it was one of the most fun roles I’ve ever done because I just got to play. Country gets into a lot of trouble, and she’s a clumsy little broad. She’s run away from a lot of trouble. Country has been through the ringer. She still has a positive attitude, though.

Do you think there’s a difference between being an actress on YouTube versus TV?

I’m really hoping that is the way of the future and that is where we’re going. This is a sitcom. The shooting, the set, the team behind it, the writing is a sitcom. I can’t see any difference except for waiting. It’s the only one of its kind as a transmedia webseries. I really hope it can push forward through the gap that seems to be there. I would hope in my heart of hearts we see NBC online and the Fine Brothers on TV, and we’re all just on the same playing field.

Was working on this better than auditioning in Los Angeles?

I audition a lot. Acting is my first love and always has been. Getting to play with the Fine Brothers was amazing. It was a totally different experience in the best way possible. I don’t mind the audition grind, because it’s all an opportunity but as far as MyMusic goes, they were the most supportive and wonderful people ever.

You’re a performer with the improv group the Groundlings. Is there a lot of improvising in MyMusic?

I was surprised because it’s actually so wonderfully scripted. Benny [Fine] has a real gift. All the writers do. They play so well with their characters. But I was happy that I could improvise as well because once you get a character it’s fun to play. Benny was so open to me taking the character and running with it. That’s the sign of a really good director. He created such a beautiful environment for that and not every director and writer does. There were times when he’d say, “Okay, do a regular take. OK, now do a Lee take.”