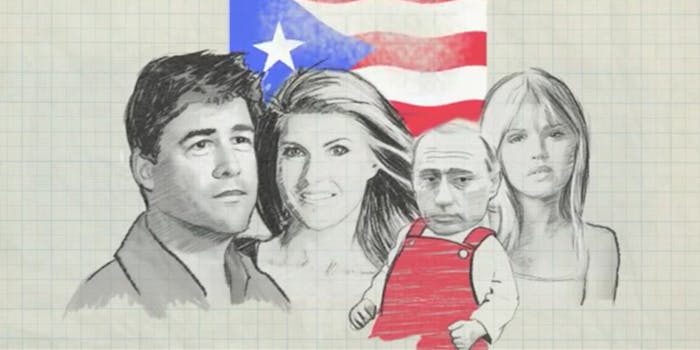 The absolute best way to learn how to draw on YouTube

Brooklyn animator Mickey Dwyer’s YouTube series, How to Draw, is as simple as it sounds.

Brooklyn animator Mickey Dwyer’s YouTube series, How to Draw, is as simple as it sounds.

In three steps, he shows viewers how to illustrate characters and forms, based on Bing image searches, over a game-show muzak soundtrack. There are parallels with the My Damn Channel series You Suck at Photoshop, a basic design tutorial with a hint of suppressed rage. Each episode ends with host/teacher Donnie Hoyle’s near-breakdown, but you’re one step closer to knowing how to use the clone stamp tool.

Dwyer’s way of teaching is a bit more laid back.

There are plenty of bad jokes throughout the short tutorials, which Dwyer laughs at freely, like he’s both host and co-host of his own late-night talk show. The feel is appropriately low-budget—he uses graph paper to draw his crude forms, for instance—which adds to the charm. He says he just has a gift.

“Everyone can learn to draw, not just supertalents like me,” he told the Daily Dot. “Simple things like using graph paper for proportions and using Bing image searches for reference can really take your drawing ability to the next level. Level 2. Or level 1 if you started at zero. Which means you probably draw like a baby or an elephant.”

Yes, even beginners can learn how to draw a Friday Night Lights family portrait, Harry Potter, or the female form. Dwyer says he has a partial degree from Savannah College of Art and Design, but “they didn’t let me technically graduate because I didn’t take enough classes. Joke’s on them because I’m on YouTube now.”

Dwyer’s a real stickler for details, too, which his Ryan Gosling tutorial affirms. “I don’t think there are any other drawing series that really focus on detail as much as I do,” he added. “I really like to get in there and have fun with detail. It’s what makes things look real, and if it looks real then it’s good, and visa versa.”

Earlier this summer, he did a tutorial on how to draw Justin Bieber. In the clip, he admits he doesn’t know much about him, except that he’s “an Australian boy, and he’s stealing our daughters’ hearts.” As is Dwyer’s trademark, he gets it all wrong, and draws his head on a beaver’s body. He does draw inspiration from what his daughters are into, though.

“[They’re] constantly influencing my art,” he said. “They are always telling me what not to draw and what’s stupid and what’s embarrassing.”

Embarrassment doesn’t really play a role in Dwyer’s art. He’s oblivious to rudimentary stylistic flaws, always proud of his mutant creations. He calls his fans “art lovers.” Yet there is a bit of satire to his method. “It’s easy to draw ugly,” he warns in the most recent episode, as he draws Vladimir Putin’s face on the young daughter of Friday Night Light’s Eric and Tami Taylor.

This penchant for parody extends to another project Dwyer does with friend Stanley Chase: a podcast called That American Life, which is their take on NPR’s This American Life, hosted by “Ira Class.” Dwyer said they cover “everything from small stories in Kentucky, to big stories in Indiana.” It’s where this commercial was born.

As for future How to Draw episodes, Dwyer said he has a back pocket of ideas, but they’re not all be pop culture related.

“Some of them are basic life-drawing instructions, like ‘How to draw feet of women on the train.’”