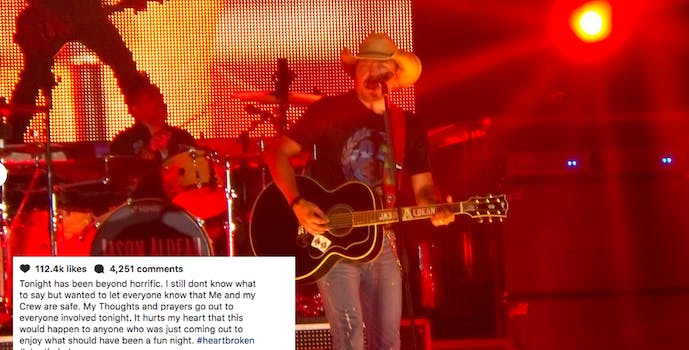 Some of them had performed at the music festival that weekend.

The country music community was stunned after a gunman killed 59 people and injured more than 527 at a country music festival in Las Vegas.

The gunman, who has been identified as 64-year-old Stephen Paddock, fired down on the crowd who were attending the Route 91 Harvest Festival from a nearby hotel while headliner Jason Aldean performed. According to an eyewitness account relayed to the Las Vegas Review-Journal, Aldean was quickly removed from the stage as shooting began.

Aldean posted an image to Instagram that read “Pray for Las Vegas” and informed his fans that he and his band were safe. He offered his thoughts and prayers and described the night as “beyond horrific.”

“Tonight has been beyond horrific,” Aldean wrote. “I still dont know what to say but wanted to let everyone know that Me and my Crew are safe. My Thoughts and prayers go out to everyone involved tonight. It hurts my heart that this would happen to anyone who was just coming out to enjoy what should have been a fun night.”

Aldean’s wife Brittany also let people know that they were both safe.

Jake Owen, who performed right before Aldean, said that he “witnessed the most unimaginable event” and thanked the Las Vegas Police Department and first responders for their work.

Praying for everyone here in Vegas. I witnessed the most unimaginable event tonight. We are okay. Others arent. Please pray.

Gun shots were ringing off of the stage rigging and road cases. No one knew where to go..thank you LVPD and responders for keeping us safe

Other country musicians who had previously performed at the Route 91 Harvest Festival earlier in the weekend let everyone know that they were safe and shared condolences for the victims.

Played Route 91 in Vegas the night before last. We were all singing. I'm in shock over this. Heartbroken for all those lives taken too soon.

Just hearing about active shooting at Route 91 Festival in Vegas. Take cover and get safe immediately! Prayers to everyone there.

Hearts out to Vegas. Route 91 concert, stage I played two nights ago. Musicians, fans, workers, you are all in our prayers right now..

My heart is breaking we were just there Friday! My prayers are with everyone @Route91Harvest

P R A Y // F O R // V E G A S • My heart and prayers go out to everyone that has been affected by the tragic events that occurred in Vegas. pic.twitter.com/QKGy30JJnl

Everyone in JAB is accounted for. They evacuated us from Mandalay. My fiancée is still in room. They won't let me in but she's safe

Praying for everyone in Vegas. We were there last night and many of our friends are still there. Praying for you all.

Chris Young, who wasn’t performing but had been in attendance at the festival, shared that he was safe and called the shooting “heartbreaking.”

Spent I don't know how long on the floor of a trailer behind the stage… know multiple people are dead. Listening to that gunfire…

I'm not gonna say anything else other than I'm lucky to be alive. As are many others… and so many people are gone… this is heartbreaking

Other country stars who weren’t performing tweeted their condolences to the victims of the mass shooting and love to Aldean, which poured in the aftermath of the shooting and early Monday.

Watching this horrific news from Las Vegas and Route 91 Festival. We played this festival last year. Praying for everyone's safety.

Just sad. And so sorry for the fans who came to sing and dance and be free and happy. thinking of everyone there & my friend @Jason_Aldean.