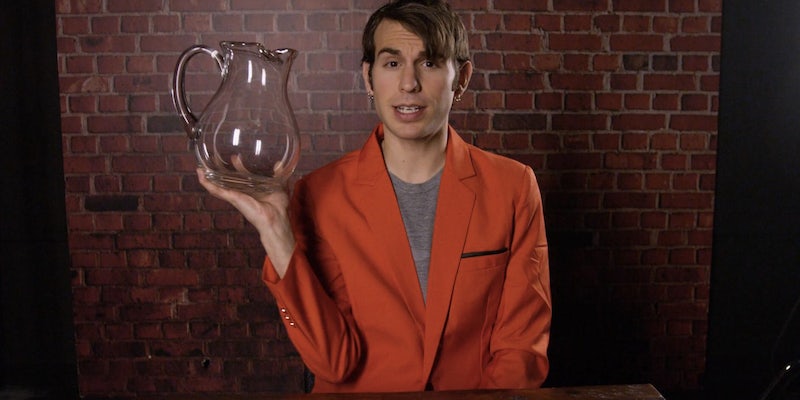 Short answer: he might not be saying 'Oh Yeah' afterwards.

Kool-Aid commercials never explain why the sugary drink’s iconic pitcher-shaped mascot, has to burst through brick walls to reach kids with his delicious beverages. Thanks to the powers of science and YouTube, however, we now know that the feat is not physically impossible, but rather, merely impractical.

VSauce3’s Jake Roper investigated the physics of those iconic advertisements to see if the Kool-Aid Man could actually burst through brick walls. By Roper’s calculations, a 6-foot-tall Kool-Aid Man would have thick enough glass to both break through a standard brick wall and safely withstand the impact.

There’s just one complication: If you consider the Kool-Aid inside his pitcher body to be the equivalent of his blood, then the Man would likely lose so much of it while bursting through the wall that he would be too dizzy to say his catchphrase. Furthermore, he’d only manage to make it through one wall before beginning to fracture his glass; another hit would likely compromise his structure.

To resolve this problem, the Kool-Aid Man would have to invest in some laminated glass, the same kind they use to reinforce windshields on cars. Or, as Roper suggests, he could just use the door.