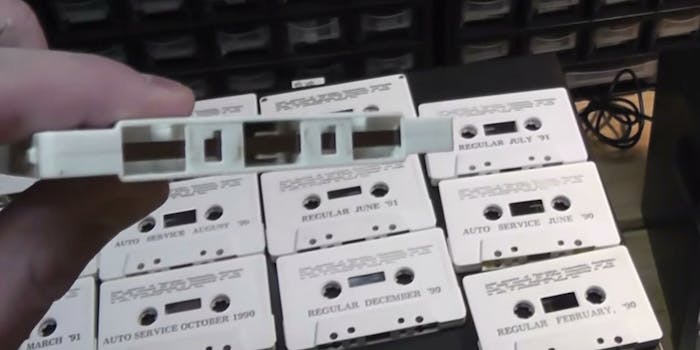 If you remember shopping at Kmart in the ’80s or ’90s, then you probably remember the schmaltzy background music that soundtracked weekend shopping trips with your family.

Last week, former Kmart employee Mark Davis offered the Internet a bit of warbly nostalgia when he uploaded his entire 56-tape archive of in-store music from 1989-1992 to the Internet Archive. Davis worked the service desk at several different Kmart stores over the course of a decade, but when he was employed at the Naperville, Illinois, store in high school, he started taking the cassettes home with him after they’d been played, thinking they’d be of value some day.

“I actually found the audio very interesting while I worked at the store because it kept repeating over and over,” Davis said via email. “You actually start to get to know the songs and in some situations I started to like them.”

In the Internet Archive description, he explains:

Until around 1992, the cassettes were rotated monthly. Then, they were replaced weekly. Finally sometime around 1993, satellite programming was intoduced which eliminated the need for these tapes altogether.

The older tapes contain canned elevator music with instrumental renditions of songs. Then, the songs became completely mainstream around 1991. All of them have advertisements every few songs.

The monthly tapes are very, very, worn and rippled. That’s becuase they ran for 14 hours a day, 7 days a week on auto-reverse. If you do the math assuming that each tape is 30 minutes per side, that’s over 800 passes over a tape head each month.

The later tapes feature more mainstream music, but the earlier ones are lacking production value; they are truly Muzak. Here’s one from 1989:

And here’s a 1992 clip, complete with Wilson Phillips:

He calls special attention to one tape from Kmart’s 30th anniversary celebration in 1992:

This was a special day at the store where employees spent all night setting up for special promotions and extra excitement. It was a real fun day, the store was packed wall to wall, and I recall that the stores were asked to play the music at a much higher volume.

Back in 2013, Davis uploaded a video of the collection to his YouTube page—home to other bits of Kmart and cassette-tape nostalgia—and people started asking him to digitize the tapes. He did so in 2013, but he wasn’t sure where to put them. The Internet Archive really is the perfect home.

“My wife thinks I’m actually kind of crazy and doesn’t understand it,” Davis said, “but I actually do understand the Internet community and how there is a following for almost everything.”