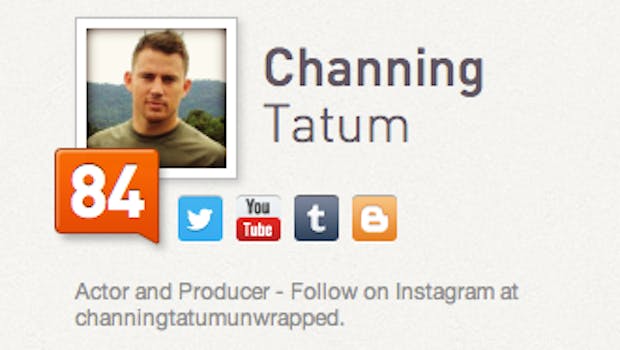 The Daily Dot predicts the probable success of three upcoming films based on Klout scores and Twitter followers.

Well, not Klout exactly, but Klout’s clout–if that makes any sense. “If the actress sitting across the lobby at auditions has a six-figure following and a Klout score in the high 70s while you’re still dithering about whether to start an account, well … she’s got a leg up,” columnist Josh Dickey wrote recently for Variety.

Apparently, especially for indie films, Klout scores are more and more of an important driving factor in casting.

In the grand scheme of things, it makes sense. Now that writers are expected to maintain Facebook and Twitter followings before they even step foot in a newsroom, it’s no surprise that that expectation extends into other aspects of entertainment. But would anyone really fault Ryan Gosling for a lack of RTs? Of course not. But just as Gosling’s obscenely beautiful face and famed attitude will sell tickets, so might Rachel Leigh Cook’s Klout score of 87. As Dickey wrote:

“Here’s why: As digital marketers gain power and influence in Hollywood, they’re looking at talent’s social-media footprint — on-camera talent primarily, but writers, directors and producers are in the mix here, too — when deciding who’ll best help them promote any given project.”

Yikes. Bad news for talented unknowns and great news for viral YouTube stars, apparently. Let’s see if Dickey’s theory works with a new upcoming films. Only time will tell if his theory is correct, but isn’t it fun to speculate?

The Hobbit: An Unexpected Journey

Peter Jackson’s long-awaited prequel has major nerd potential, but does it have the Klout to succeed?

Conclusion: The Hobbit is gonna be a total bust. Get Miley Cyrus to don those hair feet?

Indie flick about brothers? I don’t know; I just read the IMDB description.

Conclusion: Get that Cummings on the phone for a sequel! Yes, already.