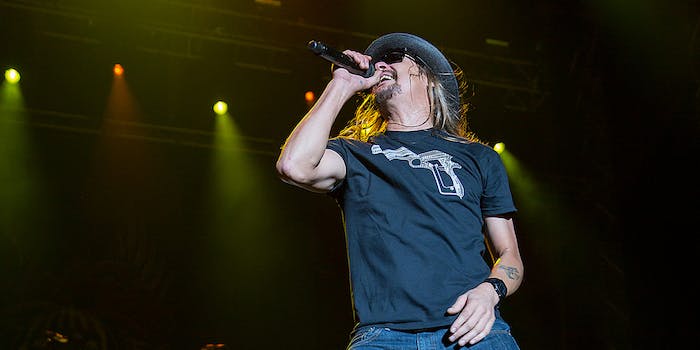 The 'Kid Rock for Senate' drama is officially over.

Kid Rock, aka. Robert Ritchie, donated $122,000 raised by selling merchandise for his fake political campaign to a voter registration group associated with the College Republicans.

Last year Kid Rock, a supporter of President Donald Trump, spurred a flurry of speculation about a possible Senate campaign when he began selling  “Kid Rock for U.S. Senate” T-shirts, buttons, stickers, and hats on the website kidrockforsenate.com.

The website also featured several possible slogans for the campaign including: “Party To The People,” “I’ll Rock The Party,” “Get In The Senate And Try To Help Someone,” and “Pimp Of The Nation.”

As the will-he-or-won’t-he speculation continued to churn, Kid Rock said he would create a non-profit to promote voter registration.

However, as The Detroit News points out, Kid Rock never made the 501(c)3 for the voter registration non-profit, and instead will send $122,000 to CRNC Action, an affiliate of the College Republicans. The group reportedly helped with voter registration work at several concerts last summer.

In October the singer finally put speculation to rest by telling Howard Stern that he was just using the “Kid Rock For U.S. Senate” as promotion for his upcoming album Sweet Southern Sugar.

“Fuck no, I’m not running for Senate,” he told Stern. “Are you fucking kidding me? Who fucking couldn’t figure that out?”

Along the way, the singer went on a profanity-laden political rant where he blasted athletes who knelt during the national anthem in protest of police brutality and “dead beat dads.”