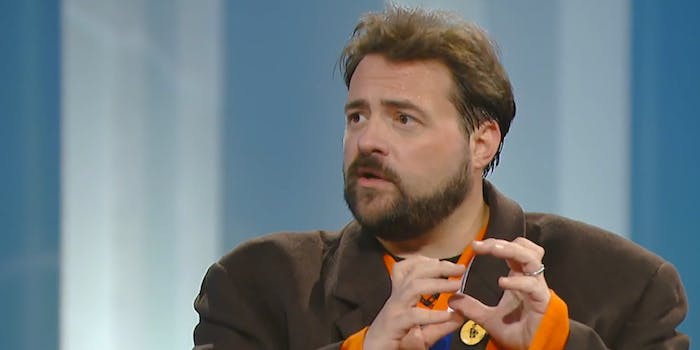 “I know people who build careers on taking footage and running commentary under it or reviewing it and stuff," Smith said.

The YouTube gaming community now has an ally in the fight against YouTube’s controversial Content ID policies: Kevin Smith.

The filmmaker and video game enthusiast stopped by George Stroumboulopoulos Tonight to promote his show Spoilers, but when the news of the NSA spying on World of Warcraft came up, Smith decided to take the interview in a slightly different direction.

He had assumed that the government had been spying on everyone for years, but the idea of a company stamping down on someone’s creativity is more concerning to him.

“I know people who build careers on taking footage and running commentary under it or reviewing it and stuff,” Smith told Stroumboulopoulos. “So now YouTube’s gone, ‘You don’t have the rights to do this.’ And they’re starting to pull back on the freedoms of expression people have been enjoying on YouTube for a while.”

It got to the point, he explained, where even the gaming companies were standing up for the content creators.

The content identification system has had its flaws since the new updates, even flagging someone’s own game for copyright. The company responded to the backlash earlier this week and offered little comfort to the gaming community, explaining simply that “rights ownership can be complicated.” Content creators argue that since they’re reviewing or adding commentary to the footage, their work is covered under fair use.

“Don’t stamp down someone’s creativity,” Smith said. “Even if it’s someone else’s creativity with something else, other people’s material. Because you make found art out of art that you find.”