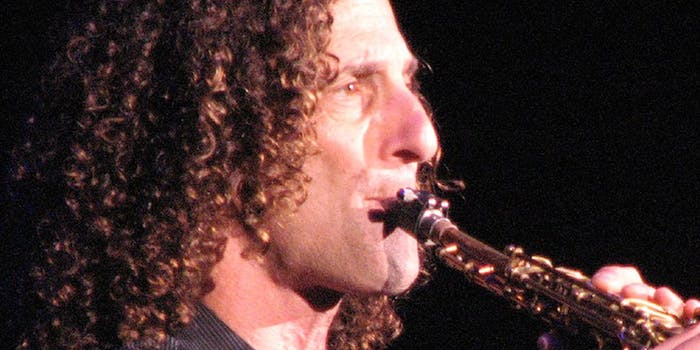 If you've always dreamed of running your fingers through a lock of Kenny G's hair, here's your chance.

What would you give to own a curl of jazz impresario Kenny G’s legendary locks? A Kickstarter project is offering one generous backer the chance at owning just such a prize.

Los Angeles filmmakers Brian McGinn and Rod Blackhurst have thirteen days left to raise the $100,000 necessary to begin production on Kenny: A Documentary in G, a film the two friends hope will document the saxophone icon’s “unlikely rise to the top of the mainstream music world.” Currently flatlined at $12,000, the two have turned to a slew of creative rewards in an effort to raise that last $88,000.

McGinn and Blackhurst have been lucky enough to get Kenny G’s approval on their fundraising techniques, which they hope will give the project a silky smooth push. The jazz master has even thrown his own energy and resources into the pot, offering special edition “Kenny with Famous Haircuts” t-shirts to $75 donors and online chat opportunities to those who pledge $500 or more to the project.

Kenny and the boys have reserved the real rewards for the big time backers.

The campaign offers eleven different rewards for those willing to chip in $5,000 towards the film’s development, including five signed saxophones, five dinners with Kenny and the film’s directors, and one intimate concert that the G will hold in an actual elevator bank.

All three of those rewards pale in comparison to the $10,000 offer, a real life lock of Kenny’s picture perfect hair, which McGinn and Blackhurst will present to the backer “lovingly framed and delicately lit in an archival quality vial, with a plaque, and certificate of authenticity.”

“This is the granddaddy of all incentives,” the two wrote in the reward’s description. “You will be purchasing the eternal jealousy of everyone you have ever met or will ever meet throughout time.”

Enticing, but we’re left to wonder: What’s it going to take to get that Wayne’s World-patented Dentist Chair show?