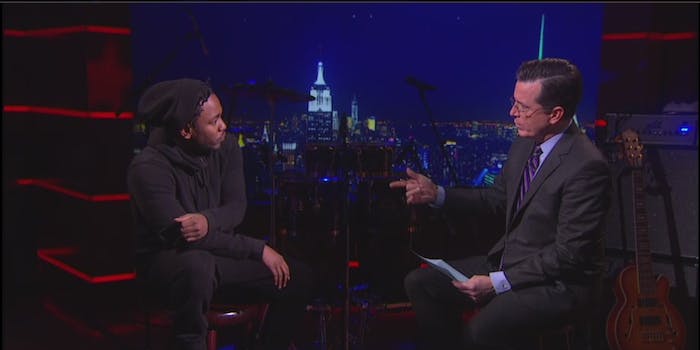 Talk about going out on a high note.

Kendrick Lamar, Tuesday night’s guest on The Colbert Report, happened to be Stephen Colbert‘s last-ever musical performance. To send out the show in style, Lamar, accompanied by a jazz band that included singer Bilal and hip-hop producers Terrace Martin and Thundercat on the saxophone and bass, debuted a brand new and as yet untitled song.

The new track, which was produced by French artist Astronote, features aspects of spoken word, jazz, and the righteous indignation of a Public Enemy or NWA record.

Prior to the performance, Lamar sat down with Colbert, who joked that since Lamar would be the last Colbert Report musical guest, “Paul McCartney, R.E.M., Jack White, and Nas were your opening acts.”

Colbert also asked Lamar what it meant to be the leader of West Coast rap, why he wanted to be called a “writer instead of rapper,” and whether or not he could rhyme the word “Colbert.”

Screengrab via The Colbert Report/Comedy Central