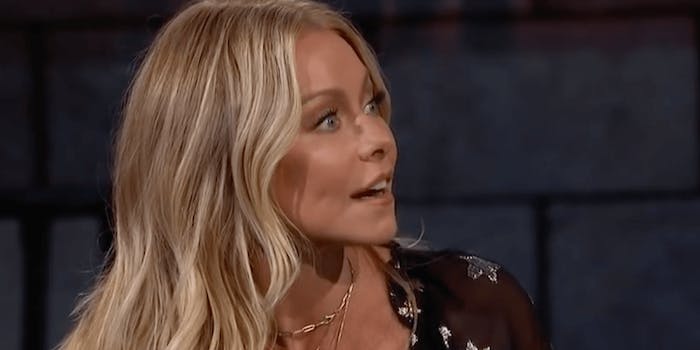 '[P]eople love to have fake outrage over something they didn't see.'

Kelly Ripa defended a joke she made about her college-attending son’s financial situation on Jimmy Kimmel Live!

The daytime talk show host appeared on the late-night talk show Tuesday and discussed with Kimmel the trials of her son, Michael Consuelos, living on his own in Brooklyn, New York. The 22-year-old, who attends New York University, is learning about adulthood by diving in, according to Ripa.

“I think he loves the freedom,” Ripa joked. “He hates paying his own rent, and he’s chronically poor. I don’t think he ever really experienced extreme poverty like now. … Now that he’s living on his own, he’s called three times.”

Many on social media didn’t like Ripa, a wealthy and successful celebrity, making light of true-to-life poverty.

Ripa, who’s married to actor Mark Consuelos, dismissed the backlash on Wednesday, providing a rebuttal in the comments section an Instagram post of her and her son.

“Michael goes to college and is a senior and works full time,” she wrote. “He is in his first non-parent subsidized apt with roommates. I’m used to getting a lot of slack because people love to have fake outrage over something they didn’t see.

“They only read a headline and wag their tired fingers. I didn’t grow up privileged and neither did @instasuelos [husband Mark Consuelos’s Instagram handle]. We work and we expect our kids to as well. And the fact that a pack of fools want to b***h about that, i say let em.”

Poverty in New York City is defined as living off less than $11,500 annually, or $23,021 a year for a family of four. Ripa reportedly takes home $20 million per season for hosting her daytime talk show Live! It costs about $76,000 to attend NYU for one school year, according to CNBC.